The Three States of Thanksgiving

We had so much fun this Thanksgiving because we got to combine our favorite things: Travel + Family Time! We flew to Williamsburg, VA to visit Dan's family, and also squeezed in a couple of road trips & hockey games while we were on the east coast. Dan has a "bucket list" goal of seeing a game at every NHL arena, so we try to get to at least one new arena each year. Yes, we're a little crazy, but we both love having a reason to travel around the country.

We flew to VA Monday night on a red-eye, which was awful. I knew it would be before we even booked the flight, but the cheaper price and getting to VA almost a whole day earlier was too tempting. I slept for about an hour face-planted on my tray table, and woke up needing a chiropractor. Dan slept just a little longer than I did on the plane, so as soon as we got to his parents' house on Tuesday morning, we went straight to bed for about 3 hours. I thought for sure we'd get sick from the lack of sleep, but God was good to us. 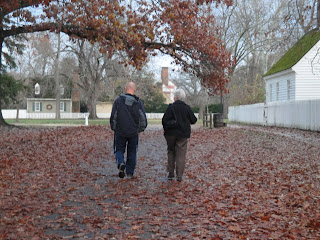 Once we were awake again, we visited Colonial Williamsburg to walk around. Seeing the beautiful fall leaves made me realize how much I miss them! 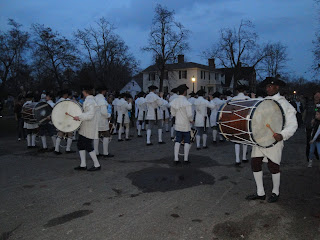 The Fife & Drums were playing at CW that night! It's a group of boys & girls ages 10-18 who play military music, and they're extremely talented! 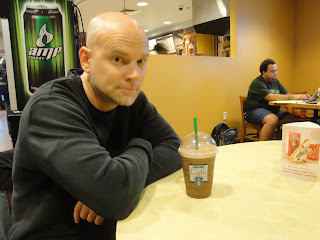 This is where Dan needed some serious caffeine (and maybe a shot of something stronger) before we went country line dancing at a bar with Dan's sister, Robin, and some of her friends. Which is hilarious if you know any of Dan's New York born-and-bred family. I probably had the best time in the group since I actually like country music and grew up with Texans and who cares if I'm an incredibly bad dancer? I did keep a good distance between myself and the next person so I wouldn't collide when I made all the wrong moves. 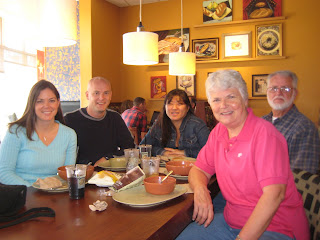 On Wednesday, we met Robin for lunch before Dan & I drove down to Raleigh, NC for our first hockey game. 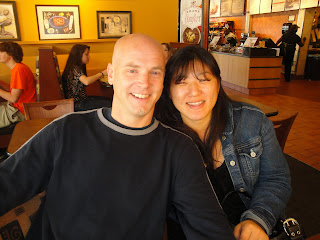 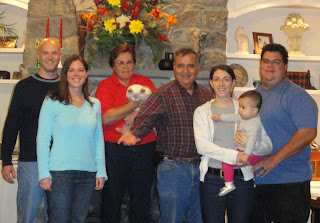 We visited the Feliciano family in Raleigh, who are the Jesters' long-time friends from Long Island, NY. Mr. Feliciano made an amazing dinner and we enjoyed catching up with them and meeting the newest member of their family. 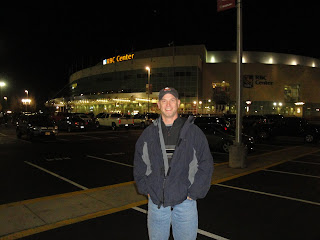 Then we went to the Carolina Hurricanes vs. Montreal Canadiens game! 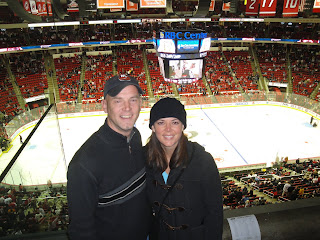 We cheered for the home team, but the Canadiens won in overtime.


On Thanksgiving Day, the Jesters filled their house to the brim with family, friends, and food. 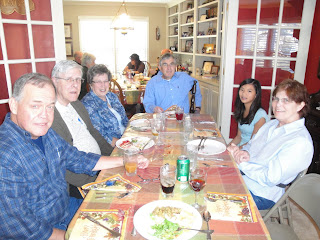 Everyone is full & happy. There were countless side dishes, and all of them were delicious! Fortunately, there were plenty of leftovers for us to enjoy later on. 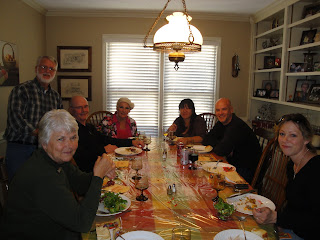 After dinner, a few of us took a walk along the trail that runs behind the Jesters' house. It was a pretty day, and it felt good to move after all that eating! 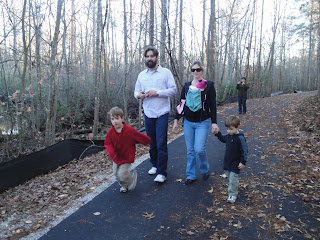 Dan's cousins Jon & Carrie and their kids on the trail, & Robin taking a picture in the background 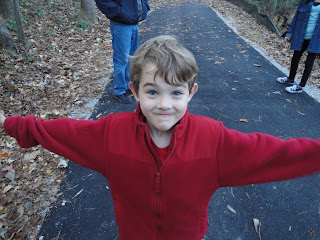 Dylan got to run off some of his energy, then it was time to go back for dessert and games! 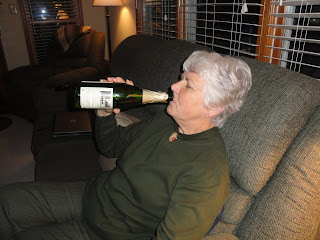 After one of the busiest days of the year, this is how Mom J. spent the rest of the evening. Haha! Okay, she was just finishing off the sparkling cider, but this picture is EPIC.

On Friday, Dan & I rented a matchbox car and drove to Washington DC for our 2nd hockey game. The traffic wasn't bad at all, and since we got there earlier than we anticipated, we spent an hour taking a whirlwind driving tour of The Mall. 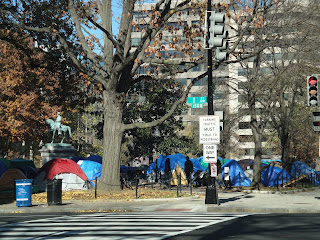 Occupy DC was in full effect 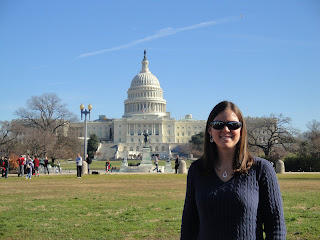 Dan illegally "paused" to take a picture of me in front of the Capital. 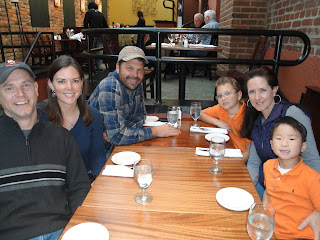 Then we met my cousin Kim, her husband Jay, & their boys, Campbell and Cael, for lunch in Old Town Alexandria. It was our first time meeting Cael, and we loved spending some time with their family while we were in the neighborhood! 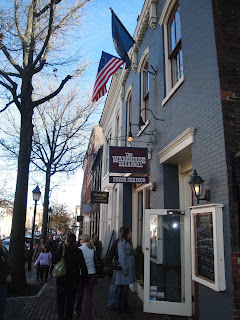 After lunch, we walked around the Alexandria streets, soaking in the quaint atmosphere. 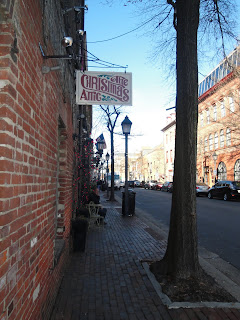 Lots of cobblestones, old brick houses and shops, and real gas lamps. I wish we had more time to actually go in some of the stores, but hopefully we'll get the chance another time! 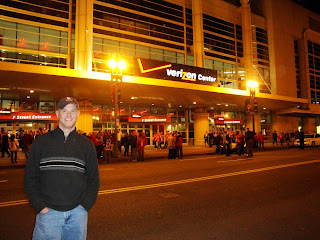 We headed back to downtown DC for the Capitals vs. NY Rangers game. 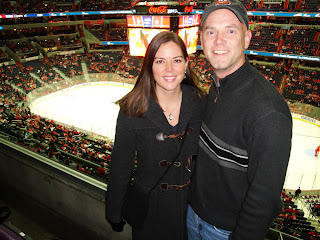 As a life-long NY Islanders fan, Dan is by default a Rangers-hater. But the Capitals just couldn't pull it together and they lost 3-6. 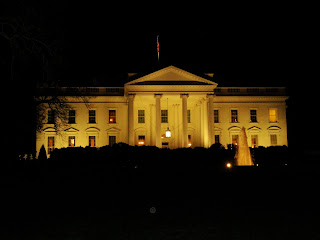 After the game, we couldn't resist staying an extra couple of hours to see the buildings lit up at night. DC is such a beautiful city with amazing history. We hope we can take another trip there soon to spend a few days. 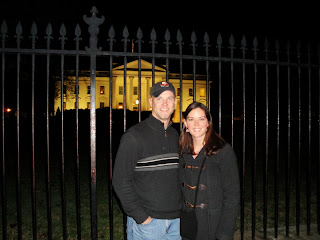 I know I saw the White House when I was a kid, but apparently it didn't make as big an impact on me as the memorials. So Dan & I walked there from the arena so I could see it again for the first time. :) 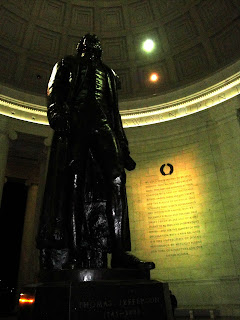 We drove by most of the famous buildings, but made a quick stop to go inside the Jefferson Memorial. This honor was bestowed upon Jefferson because he alone had the foresight to demand a parking lot at his memorial. Parking in DC is one of those amazing feats that other people have clearly accomplished, but you cannot figure out how they managed it. They must've gotten there at 4 a.m. like those crazy Black Friday shoppers. 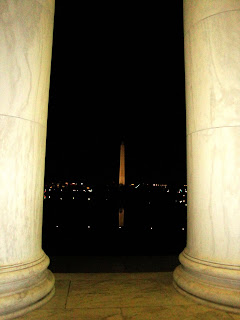 But I digress. Here's a view of the Washington Memorial from the steps of the Jefferson Memorial. 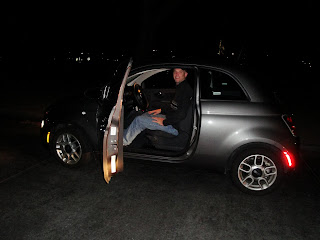 And here's a picture of Dan looking like a giant in our car rental. :)

I have to tip my hat to DC, because it is one of the few places I've ever seen Dan get lost. He has an incredible sense of direction (it's God's way of balancing the fact that He gave me no sense of direction), but he was no match for DC's one-way streets in the dark. Since you will probably never experience it first-hand, I'll describe this unique phenomenon. Instead of driving more slowly and cautiously while trying to get his bearings, Dan drives faster to minimize any time lost. He now depends solely on his peripheral vision and Spidey-senses to see the road and traffic in front of him because he's looking all other directions, taking in landmarks & reading street signs at the speed of light. The act of merging or *heaven forbid* stopping in front of him is treated as a direct assault and his priority becomes getting our car ahead of the offending party. If the space is too small, Dan moves solid objects with his mind a split second before driving through. We hit nothing. No one honks. And then, we are somehow on the right road heading the right direction, our time in The Matrix nothing but a faint memory. And we drive back to the Jesters' house.

On our last day, we hung out with Robin in her apt. for a while before meeting Dan's folks at Friendly's ice cream parlor. Ice cream parlors don't exist in San Diego, but they should. Large establishments dedicated to fried food and ice cream should be impartially available to everyone. 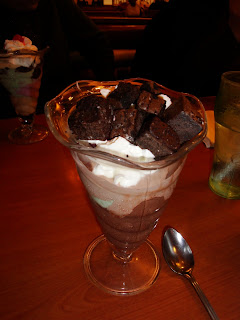 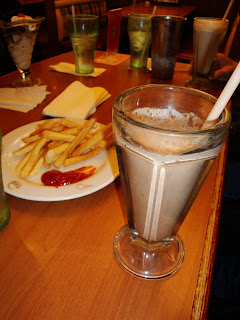 Dan's meal of choice: French fries and a chocolate shake 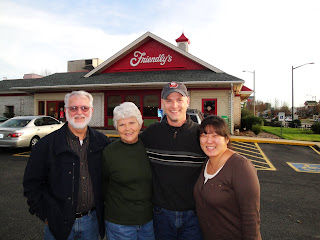 We love making memories with some of our favorite people!
Posted by The Jesters at 8:12 PM

I love this blog post. You guys had a very full trip! It was so great to see you! Also, I have to say I love the "epic" photo. :)

I second that! The epic photo was great.

I also enjoyed the picture of Dan in the rental car.

Speaking of split second! Our visit was too short! Next time you spend the night! Love the play by play....

I love the way you described Dan's driving. Hilarious.