The Happiest Place on Earth!

For 4th of July this year, we wanted to do something joyful, timeless, and expensive. That's right, we bought Disneyland annual passes! It's been a long time coming, seeing as we're both Disney freaks.  We got annual passes 7 years ago when we moved to San Diego and had no friends, so we had a lot of free time to drive to Anaheim. They've updated several rides at Disneyland and expanded the California Adventure park since then, so we were excited to check out all the new stuff! 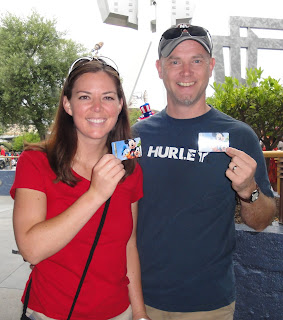 One tiny little card = a year's worth of happiness

We heard that Disneyland is insanely crowded on the 4th of July﻿, so we didn't have high expectations of doing too much that day.  We spent a lot of our time watching the patriotic shows and concerts they had for Independence Day only.  There was a Marine Corps band that marched up and down Main St. and played an hour long concert in one of the amphitheaters.  An a cappella choir sang beautiful renditions of everyone's favorite patriotic songs. There were also the typical Disney-themed parades and shows, and we stopped to watch those. 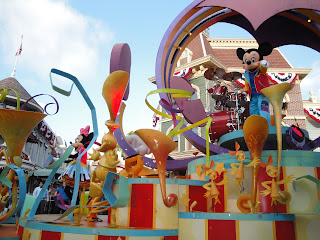 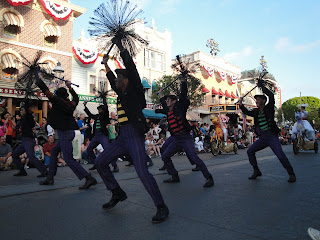 They had all kinds of floats with different characters and movies represented, but this was my favorite. 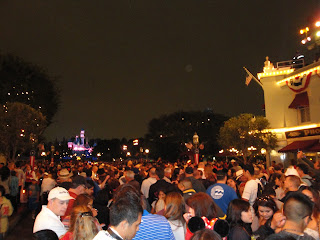 And then about an hour before the fireworks started, we got to experience the insane crowds everyone warned us about! Dan said it felt like Times Square in NYC on New Year's Eve, but much, much warmer. 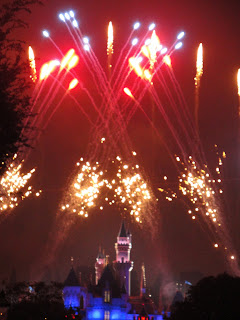 The show was definitely worth it! No one makes fireworks dance to music like Disney. They stepped away from their typical theme and choreographed the 4th of July show to patriotic music.  Fun times!

We were also glad we didn't stay in San Diego to watch this fireworks fiasco.  What a bummer for the city and all the people who fought the crowds to see the downtown fireworks show that night!

Fast forward to the very next weekend, and we were back at Disneyland!  We took Thurs and Fri off from work, and this time we had four days to enjoy both parks at a leisurely pace. 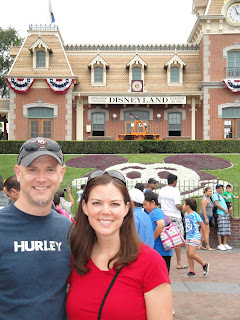 We rode just about every ride over the long weekend. 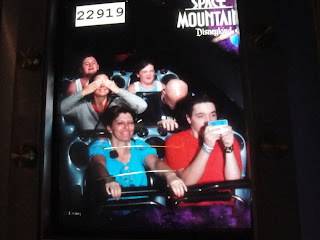 In the dark tunnel at the end of Space Mountain, Dan and I know exactly when to protect our eyes from the blinding camera flash. 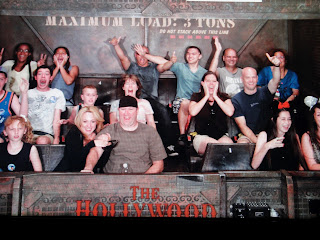 I've loved the Hollywood Tower of Terror since I was a kid! Poor Dan had to ride it more times than he probably ever wanted to. 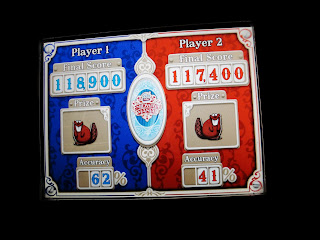 But he got me back by beating me (again) at Toy Story Mania. If I ever threaten you with a gun, you're more likely to live if you just let me aim at you, I'm that bad of a shot. But this time I swear I was winning the whole time! I was so excited to get a picture of the final score only to find that Dan beat me IN THE LAST 30 SECONDS.  Arrrrrgh!! 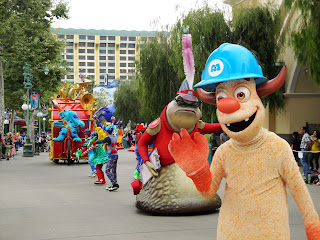 We stopped to watch the parade in California Adventure, which focuses on the Pixar movies. We missed the memo that it was a "wet" parade, where the characters innocently smiled and waved at you before spraying you in the face with a water gun! 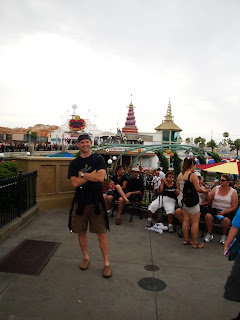 Dan watched the parade from a distance since he thinks getting wet while fully clothed is a less than magical experience. But there was one nice hot morning when he wore his swimming trunks and we rode all the wet rides back-to-back before swimming at our hotel pool in the afternoon. Good times! 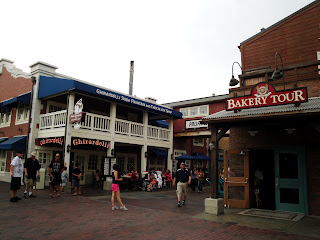 Something amazing and chocolatey was added since the last time we went to California Adventure!  You'd better believe we stopped by this spot every.single.day to get free samples of my two favorite foods, sourdough bread and chocolate. 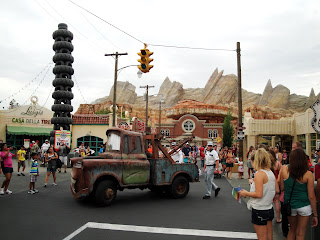 And last but not least, we spent quite a bit of time in the new Cars Land they added to the California Adventure park.  They did an amazing job on this expansion! 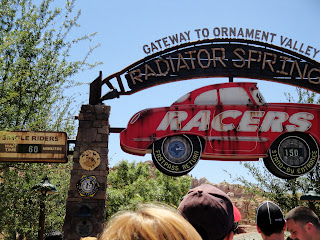 The Radiator Spring Racers was the hot new ride that was packed from opening to closing time.  Check out those wait times - 150 minutes for the regular line and 60 minutes for the single-rider line. Gack! We rode it for the first time on Friday morning before the park got too crowded and *only* had to wait 80 minutes in line. 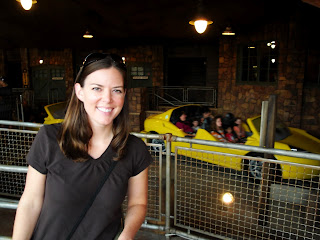 So excited about finally getting to sit down my first ride! 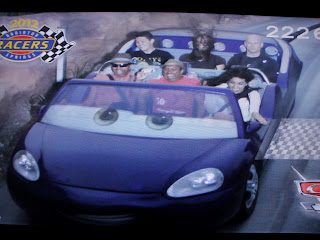 Unfortunately, my hair chose this opportunity to attack my face! This picture cracks me up - it looks like Dan is riding with Cousin It. Needless to say, the hair went in a ponytail immediately. 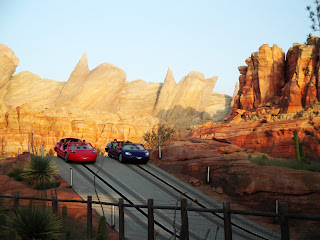 Look how amazing the scenery is! And the ride itself is a blast, but the line is soooo long. As annual pass holders, we had one day we could choose to go to the park one hour early.  So on Sat. morning, we got there at 7 am and rode this ride 4 times in a row (by waiting on the single rider line) before the park officially opened at 8 am. Then we let everyone else wait in the super long lines the rest of the day. 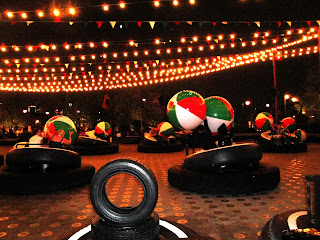 They had this cute new ride in Cars Land, too. They're bumper cars in the shape of giant tires that float on a cushion of air instead of being attached to a track.  So you can go any direction you want, and you control your tire by leaning your weight in the direction you want to go. It was funny watching other people ride while we were waiting our turn. I'm pretty sure a few couples needed marriage counseling afterwards. 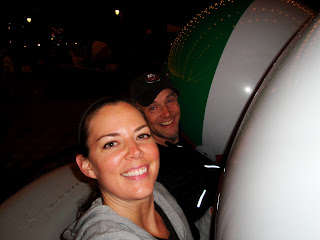 To add to the hilarity, they had these huge beach balls you could throw at each other during the ride. We grabbed two right away and after we got started, I playfully tossed my ball towards someone. Dan waited until we were going full speed towards a couple of sweet motherly types and used the momentum to nail one of them directly in the face! Good grief, that man knows how to turn anything into a high impact sport! 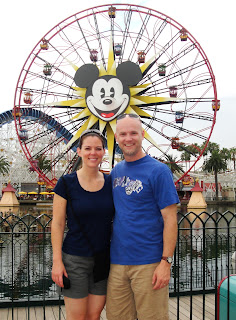 This was the viewing area for the new nighttime water/light show in California Adventure called "World of Color".  We saw the show from the back of the viewing area the first time and it was a little disappointing because we felt so far away.  So the next night, we brought a picnic dinner into the park and camped out right up front an hour early. It was 100% better seeing the show up close, although we got pretty wet from the water spray. We loved our long weekend at Disneyland and we're looking forward to going back all year!
Posted by The Jesters at 5:07 PM 2 comments: