This Wednesday night, Virginia had a major snowstorm and all schools were closed on Thursday and Friday.  My office and many other businesses also shut down, so our family made the most of being snowed in! It's the most snow we've seen since moving to Virginia Beach, and we're thankful that we didn't lose our power in the storm, since I'm sure many people did. 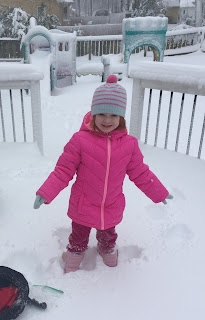 As soon as Emma woke up, she wanted to go outside to play!  We made her eat breakfast and bundle up first.  She had the best time making snow angels, having a snowball fight with Dan, and exploring our back yard winter wonderland. The snow had piled up between 6"-12" and in some areas where drifts had formed, it was up to her thighs!  At one point she went around the corner of the house out of my sight and I heard her yell, "Mom! Mom! Come here!" I yelled back, "Come back here to tell me what it is, Emma," since I didn't want to plow through all that snow myself. *Long pause* "I CAN'T WALK!" She was stuck fast - heh! 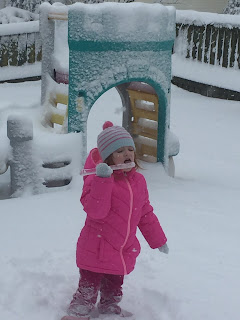 Licking an icicle and pretending it's a lollipop. 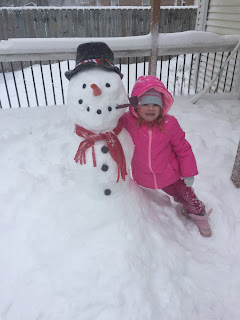 *We* built a snowman (I'm giving her credit for carrying the snowman accessories out of the house and saying, "C'mon, Mom! Hurry up and make the next part!" every time I stopped to take a breath. 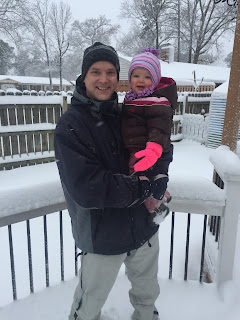 Hallie was all smiles for the first 5 minutes. 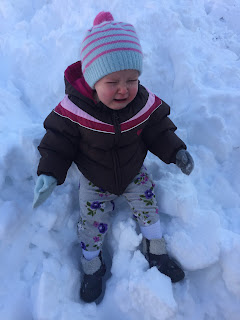 Then she touched the cold snow and the wind blew in her face, and the romance was over. 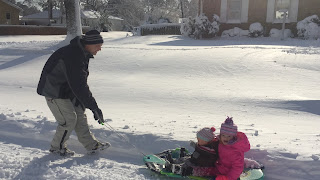 Dan was able to create 10 more minutes of fun with a sled ride! But otherwise, snow held no magic for her. 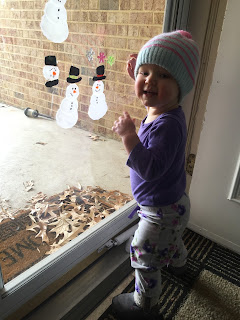 She had much more fun building snowmen inside our cozy house. 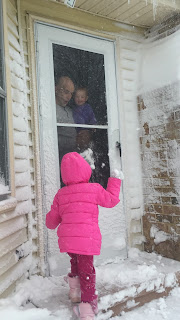 She also got a kick out of Emma throwing snowballs at her - as long as she was inside the cozy house. 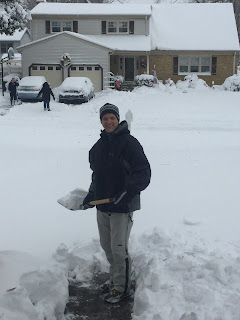 Dan spent the afternoon shoveling the driveway, with me giving him a break when I could. 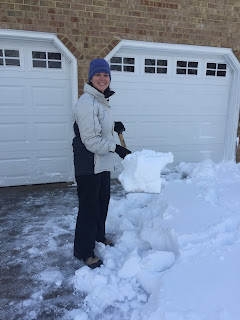 I had never shoveled snow before, and it was really hard! I didn't do nearly as much as Dan did, and it nearly broke my back and wrists! It made me feel better when Dan said that was the hardest snow he's ever shoveled before. 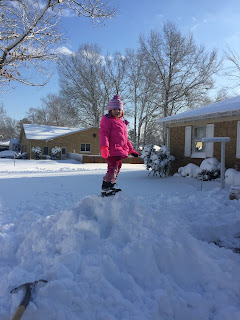 Emma appreciated all our efforts, since it resulted in a snow mountain for her to climb! 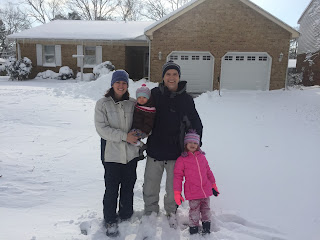 We're making fun memories during these unplanned days off. Temperatures are supposed to stay below freezing for several days, so we should get to enjoy the snow for a while!
Posted by The Jesters at 7:20 PM No comments: