We went to the Del Mar Fairgrounds ("Where the Surf Meets the Turf") today to watch the horse races with our friends Eric, Jenn, Paul, and Ann. This was the first time any of us had gone, even though the races are held here every summer. I was a little nervous that one of the horses or jockeys would get injured, because I've heard that they will euthanize a horse if the injury is bad enough. There was one moment when a nervous horse reared up inside the starting gate and got its front legs hooked over the top of the gate. Of course some of the other horses got upset and started getting crazy, too. They had to get all the horses out of the gates until everyone calmed down again. Two of them were either mildly injured or too skittish to run that race, and one of the jockeys came out limping, too. But everyone else was fine to run, and there were no incidents after that.

It was a gorgeous day, and we all enjoyed picking a horse to cheer for during each race. The names they come up with are pretty funny. One of our favorites was "Return of the King," who was 7 years old (I think he was the oldest horse we saw run all day) and he won his race! We didn't gamble any money, which was a good thing for me because I chose LOSERS every time! My strategy of picking the one with the craziest name didn't work out so well. Jenn, on the other hand, could've been a millionaire by the end of the day - so next time I'll stick with her! 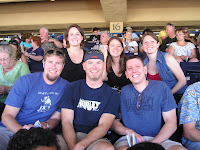 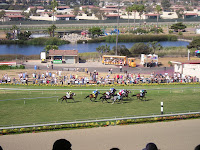 The Total Church North America Conference was held in San Diego last week, and our church, Kaleo, helped to organize it and host church leaders who were flying in from out of town. Dan and I had the privilege of hosting Murray McLellan and Sammy Whitehawk from Grace Fellowship of Saskatoon, which is in Saskatchewan, Canada. Since we weren't able to attend the conference, it was nice to be able to discuss the session topics with Murray and Sammy at the end of each day. And Dan actually had someone around the house who could talk hockey trivia with him! We also introduced them to one of our favorite foods - the Chipotle burrito! They only have one fast food place like Taco Bell in Saskatoon, so it was definitely a step up in quality, despite not being quite "authentic."

Midway through the week, we got an e-mail from Dan's cousin, Jon, saying that he was in Los Angeles for a missions conference. So we got to meet him and his pastor, Shane, for dinner on Sunday afternoon after church.

It was really fun to have visitors in San Diego! Keep it up! :)

We went to a Padres game with Murray, Sammy, and Michael from Grace Fellowship of Saskatoon, and Fox, who attends Kaleo with us. 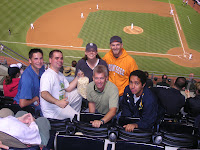 Eating dinner with Jon and Shane. 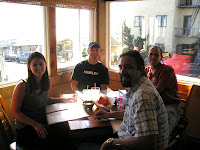 "The Greatest Show on Earth"

Dan surprised me this weekend by taking me to my very first Ringling Bros. & Barnum & Bailey Circus! It was so much fun! We went an hour before the show started so we could meet some of the performers and animals. The circus was really fun, and we were surrounded by lots of young kids in the audience, which made it even better! Dan remembers the "three ring" circus from his childhood, where they had three acts going on at the same time, and you had to choose one to watch. At this one, they usually only had one main act going on at a time, which was better for me since I didn't want to miss anything! 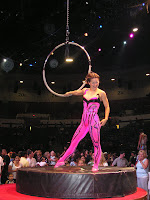 The elephants were my favorite part of the show - so adorable! 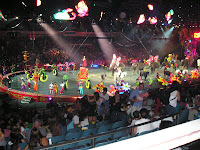 Last weekend, we flew to Denver and stayed with our friends Molly and Jeremy. It's the first time we've been back to Denver since we moved 3 years ago! On Saturday, we visited Debby's mentor from Mission Hills Church, Norma, and her husband John. Debby also ate lunch with a couple of girls she used to work with, Rebecca and Gina. On Saturday night and on Sunday, we got together with groups of friends from our old "20-something" church group at Mission Hills. It was so fun to get the gang back together and reminisce about old times. It was like no time had ever passed. We also got to meet several new members of their families, too, since there's been a baby boom among our friends recently! It was definitely the highlight of our summer, and we really miss everyone. Here are a few photos from the weekend.

Debby with Gina and Rebecca, who Debby used to work with at the College for Financial Planning The "boys' table" at Matt and Kristina's house on Saturday The group is multiplying! Kristina and her beautiful girls, Hannah and Chloe A sweet picture of the two littlest babies, Audrey and Charlotte We spent lunchtime on Sunday at the Haas House