Get On Your Boots!

Get on your boots and cowboy hat... 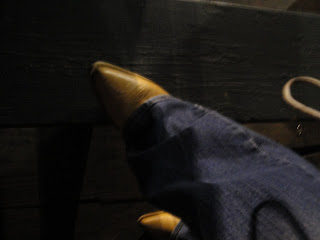 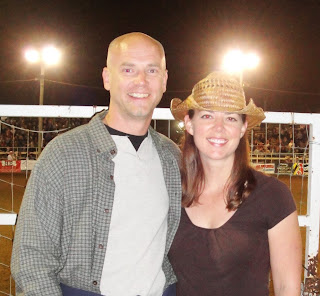 We went to the Poway Rodeo this weekend, and it was so. much. fun. It never occurred to me that anyone had gone their whole lives without seeing a rodeo - much less my husband! So when I heard the rodeo was in town, it became Priority Number One. It was kind of like Dan's shock when he learned I had never been to a circus before we got married (which we rectified at the Ringling Bros. and Barnum & Bailey Circus a few years ago).

There's something refreshing about watching people who work with horses as a profession. It's easy to forget that not long ago, everyone had horses because they were our primary source of transportation. And now tons of people live their whole lives without ever seeing one except on TV. Dan didn't know what to expect, and he was surprised at how fun it was to watch the rodeo contests. The thing I like about it is that all the skills demonstrated are practical skills for a cowboy or rancher. They're not just showing off "tricks" to entertain the crowd - well, except for bull riding. That's clearly just a pissing contest. :)

They had lots of fun events to watch, and I didn't bother getting pictures of everything since our camera + low lighting + movement = really blurry pictures. A couple of things they had at this rodeo that I hadn't seen before were Mexican riders on dancing horses who performed during a Mariachi song, and a contest for kids (ages 4-6) riding bareback sheep. Most of the kids didn't stay on for more than 2 seconds, and I'm pretty sure they all got stepped on by their sheep after they fell off. But they bounced right back up afterwards, confirming my theory that children are made of rubber.

Here are some of the photos I did take that turned out pretty clearly. 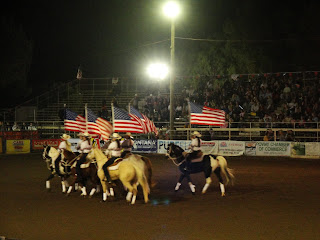 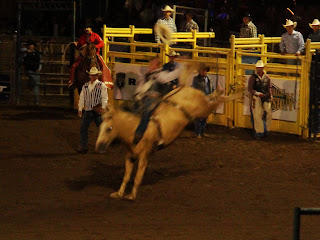 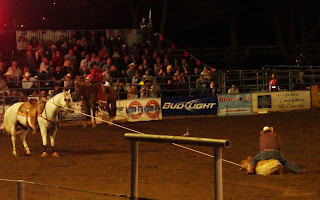 They had calf roping & tying, which made Dan feel sorry for the calves. They got jerked & thrown around by the cowboys for a few seconds, but they all bounced up and ran away afterwards like nothing had happened. (children = rubber) 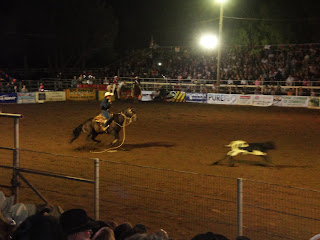 And some of them were quick enough to get away from the lasso. (Be free, baby cow!!) 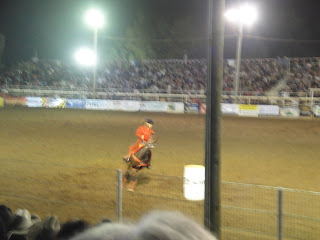 They had ladies' barrel racing, where they raced to a barrel and made a tight turn around it before racing to the next barrel. I remember watching my cousin Tricia compete in this event as a teenager. 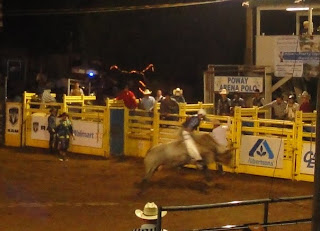 And of course - bull riding! I was happy to see that they make the riders wear helmets & chest protection now. It was cool to watch the "clowns" in action, too. As soon as the rider got thrown, they were in the bull's face, distracting him from trying to trample or gore the rider. Hardly any of the riders made it till the buzzer went off, so the ones who did were pretty much guaranteed to win money. 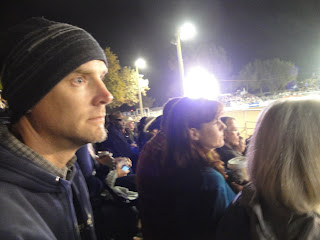 Dan looking a little nervous during the bull riding 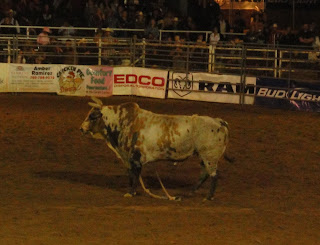 One of the victorious bulls. They probably have their own contest going in the bullpen to see who can throw their rider the fastest. Or the farthest. :) 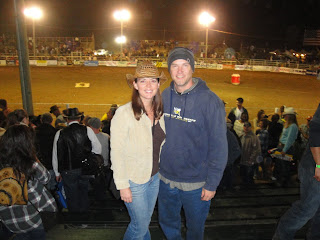 Although Dan didn't turn into a cowboy overnight, he said the rodeo was a lot more fun than he expected! If you haven't been to a rodeo before, you should go! It's well worth it!
Posted by The Jesters at 1:53 PM

Can't believe he had never been to a rodeo before!!! Those East Coasters! ha ha... So glad you all had such a good time!