Our month has been highlighted with special time with good friends. Our friends from Colorado, Molly and Jeremy, visited San Diego with their youngest son, Luke, for a conference.  They stayed at a hotel just a few miles from our house so we had them over for dinner one night and Emma and I met Molly and Luke for a walk on the beach the next morning.  It was a quick visit, but wonderful to see them so soon after we visited them in Colorado for Thanksgiving!

Dan plays roller hockey every Wednesday night and when his game time is in the early evening, Emma and I will go cheer him on.  A friend from church, Filipe, plays on Dan’s team, so we get to watch the game with his wife, Jerrica, and their sons, Trevor and Zack.  Once a month, our church has a mom + kids get-together, and Emma and I got to attend for the first time on Valentine's Day.  We had a blast!

On a sadder note, one of Dan’s former students passed away after being in a serious car accident. He was 21 years old and training to join the Navy Seals, but Dan knew him best when he taught his 8th grade class eight years ago. We attended the funeral, where Dan reconnected with many from his 8th grade class from that year, as well as former co-workers, students, and families he hadn’t seen in years.

We spent our gift cards and money from Christmas and my birthday to buy a video baby monitor, and it was the best possible gift!  Emma used to fall asleep in our arms during her last bottle feeding and would stay asleep when we put her in the crib. But lately she wakes up when we lay her down and we have to let her cry for a bit and soothe herself to sleep.  She's fine, but it’s nice to be able to keep an eye on her for my own peace of mind.  If we hear her in the early hours of the morning, I can tell at a glance if she’s really awake or just resettling, so I don’t go in her room if there’s a chance she’ll go back to sleep.  If this monitor lasts a while, it’ll be priceless when she’s a toddler and gets out of bed when she’s not supposed to!

This month, Emma made giant leaps in development! Within a few week's time, she had mastered several new skills.  Here are some fun facts about her at 10 months old:
Here are some pictures from the past month: 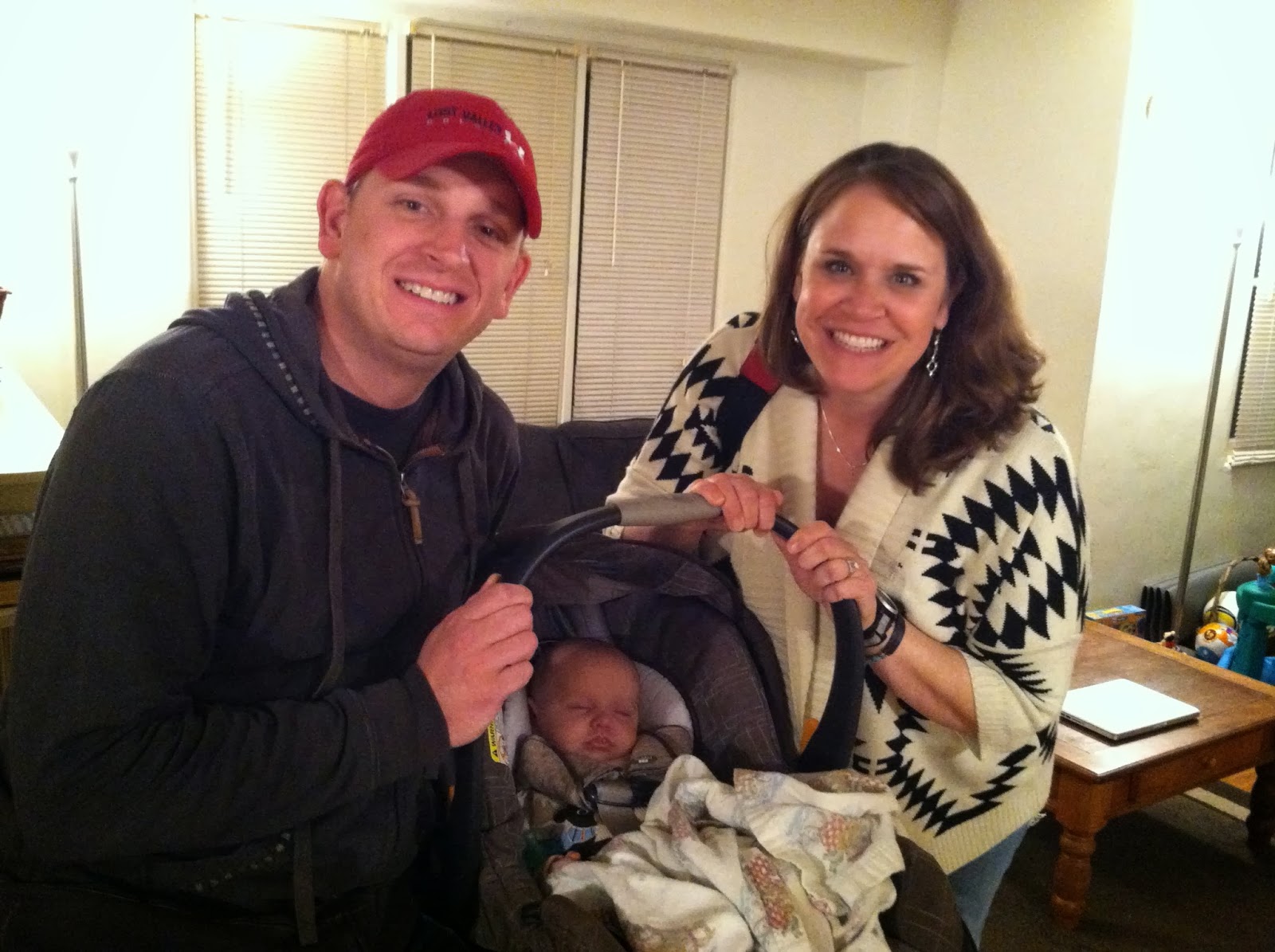 Our friends from Colorado, Jeremy, Molly, and their baby boy, Luke. 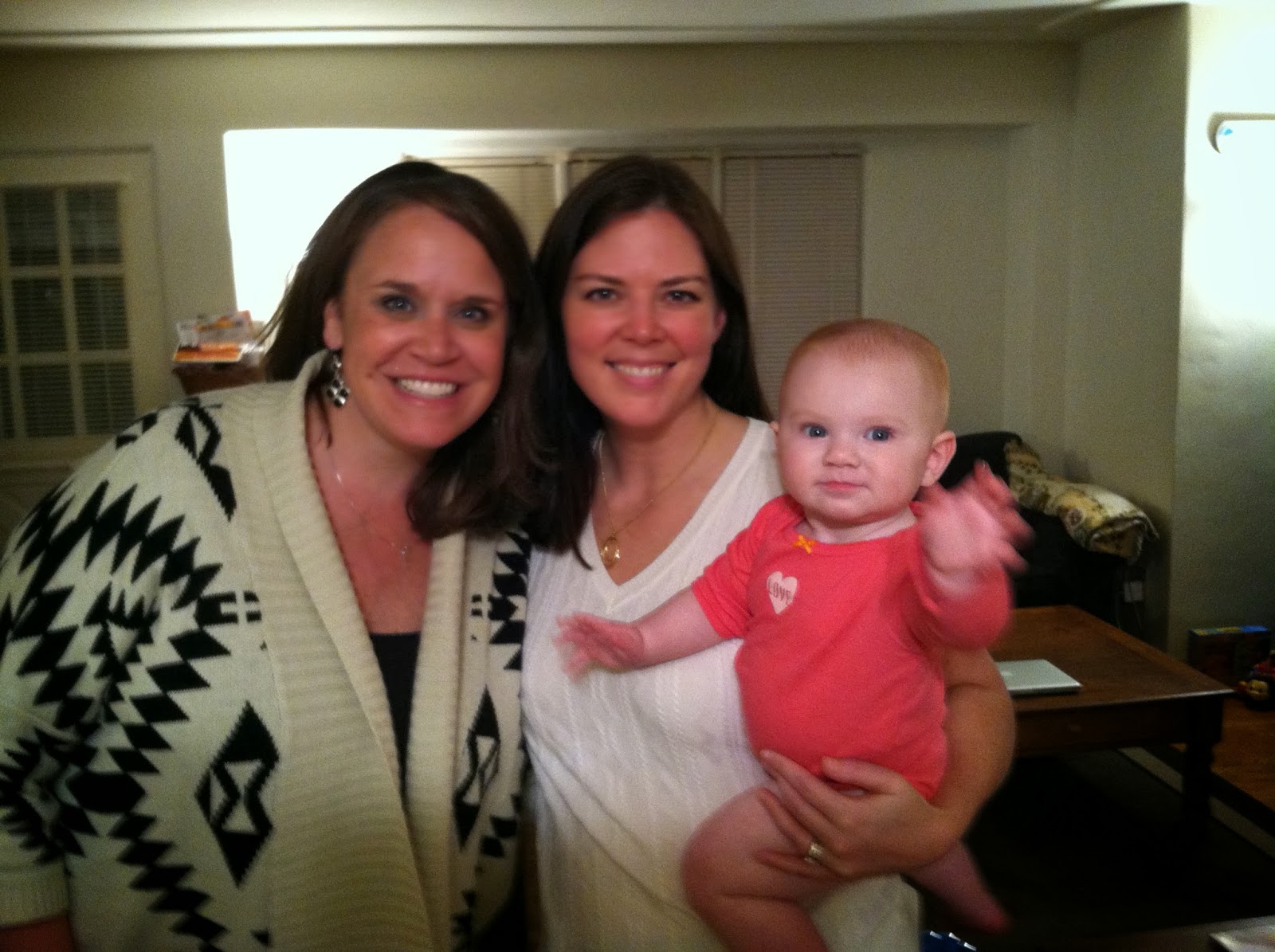 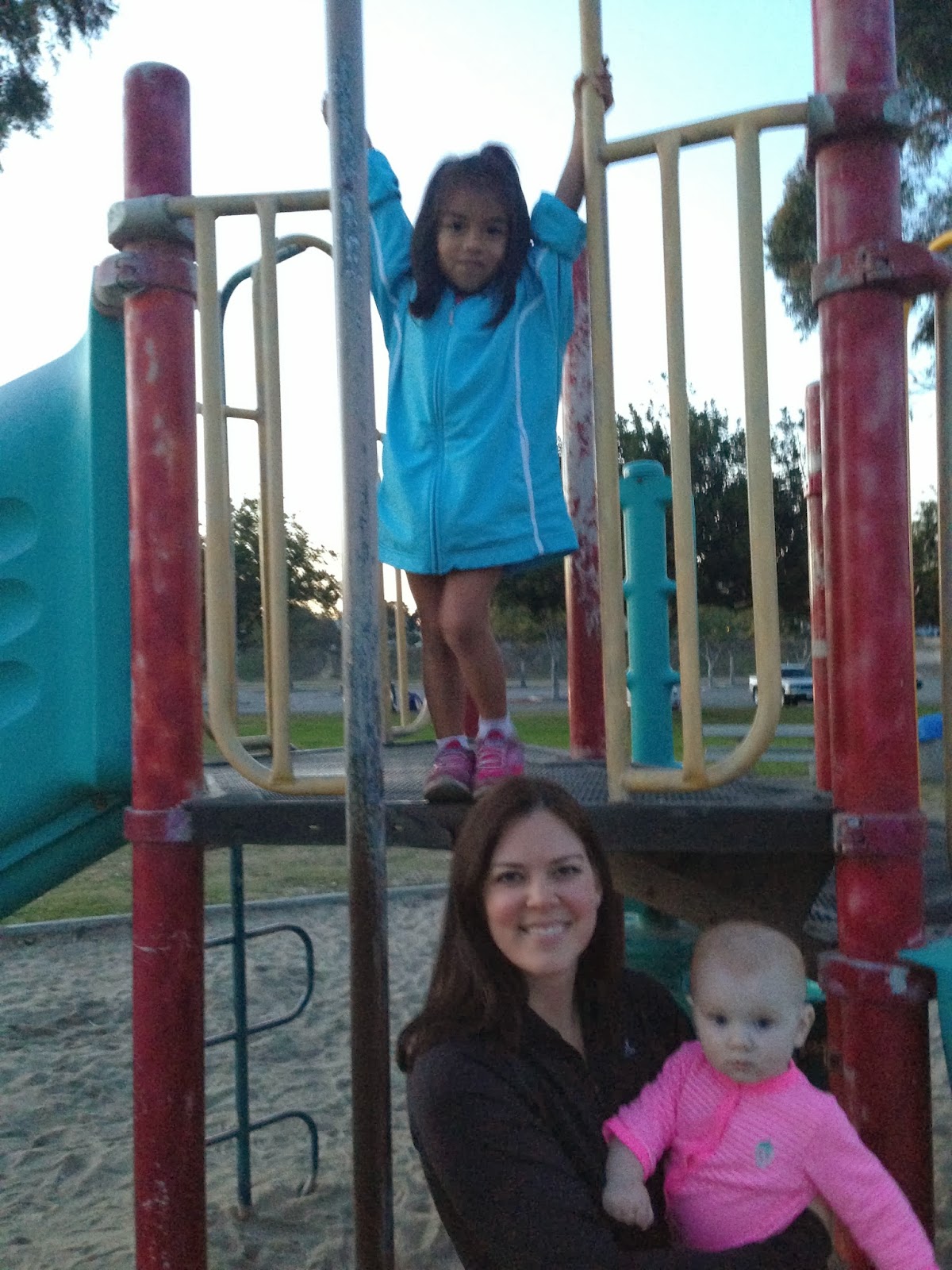 We babysat our good friends' daughter, Olivia, one evening and took the girls to play at our neighborhood park. 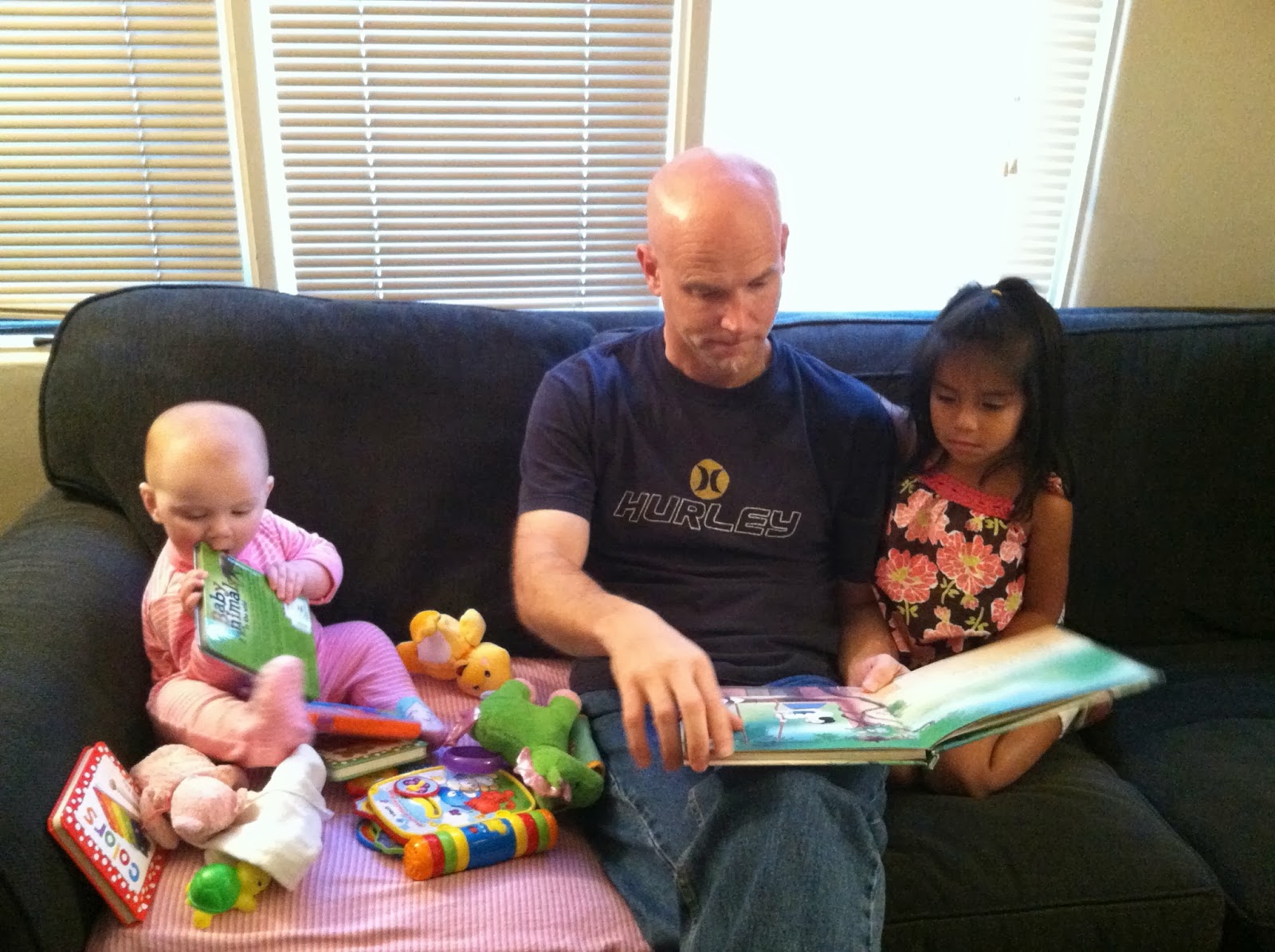 Dan and Olivia read books while Emma chewed on hers 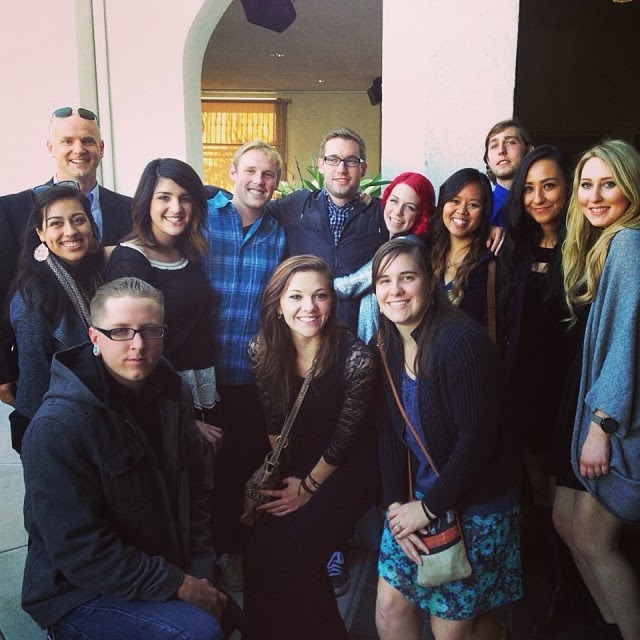 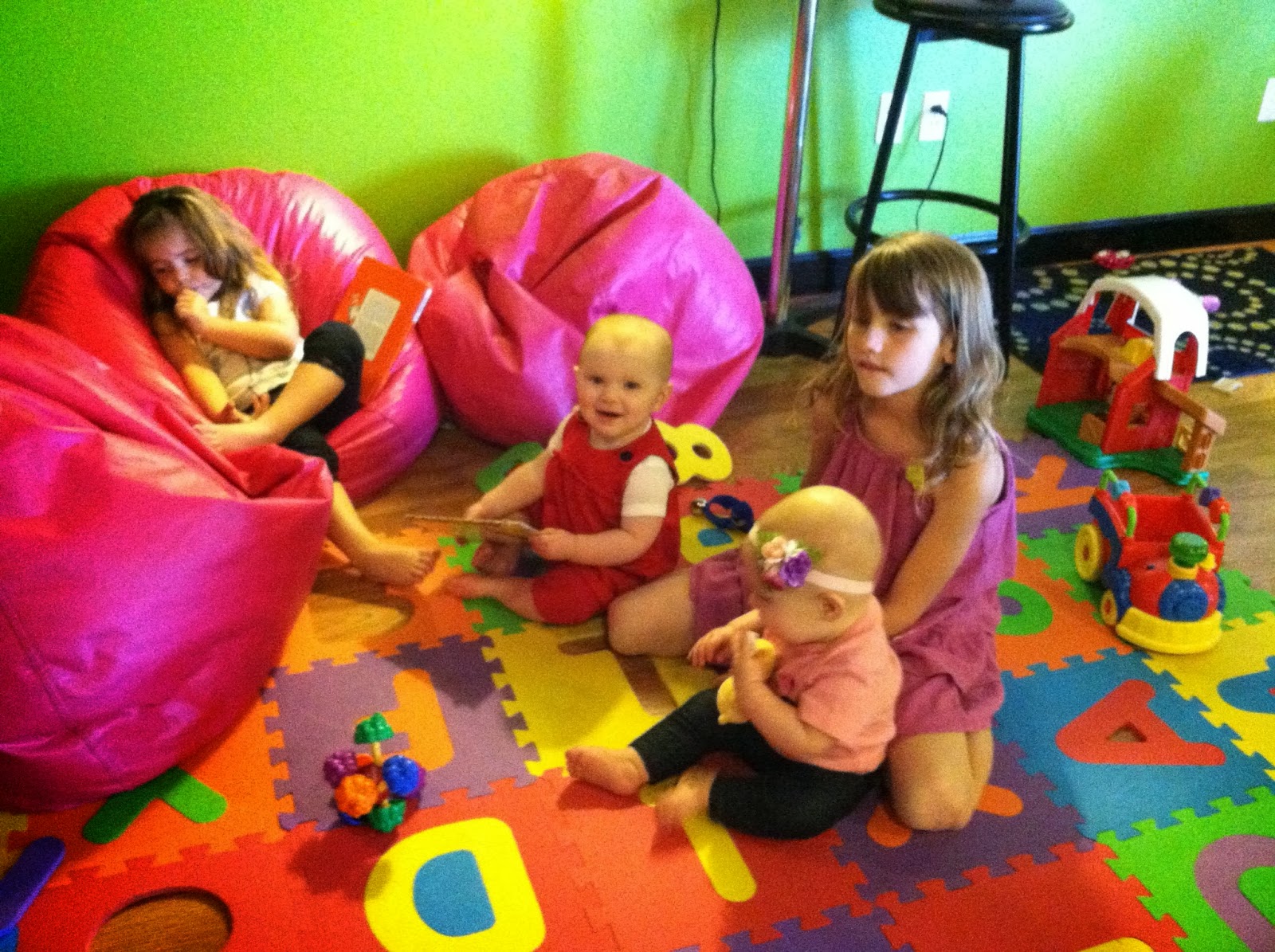 Emma playing with some of the girls at our church's mom & kid get-together. There were about a dozen kids there, so she had a blast and was ready for nap time afterwards! 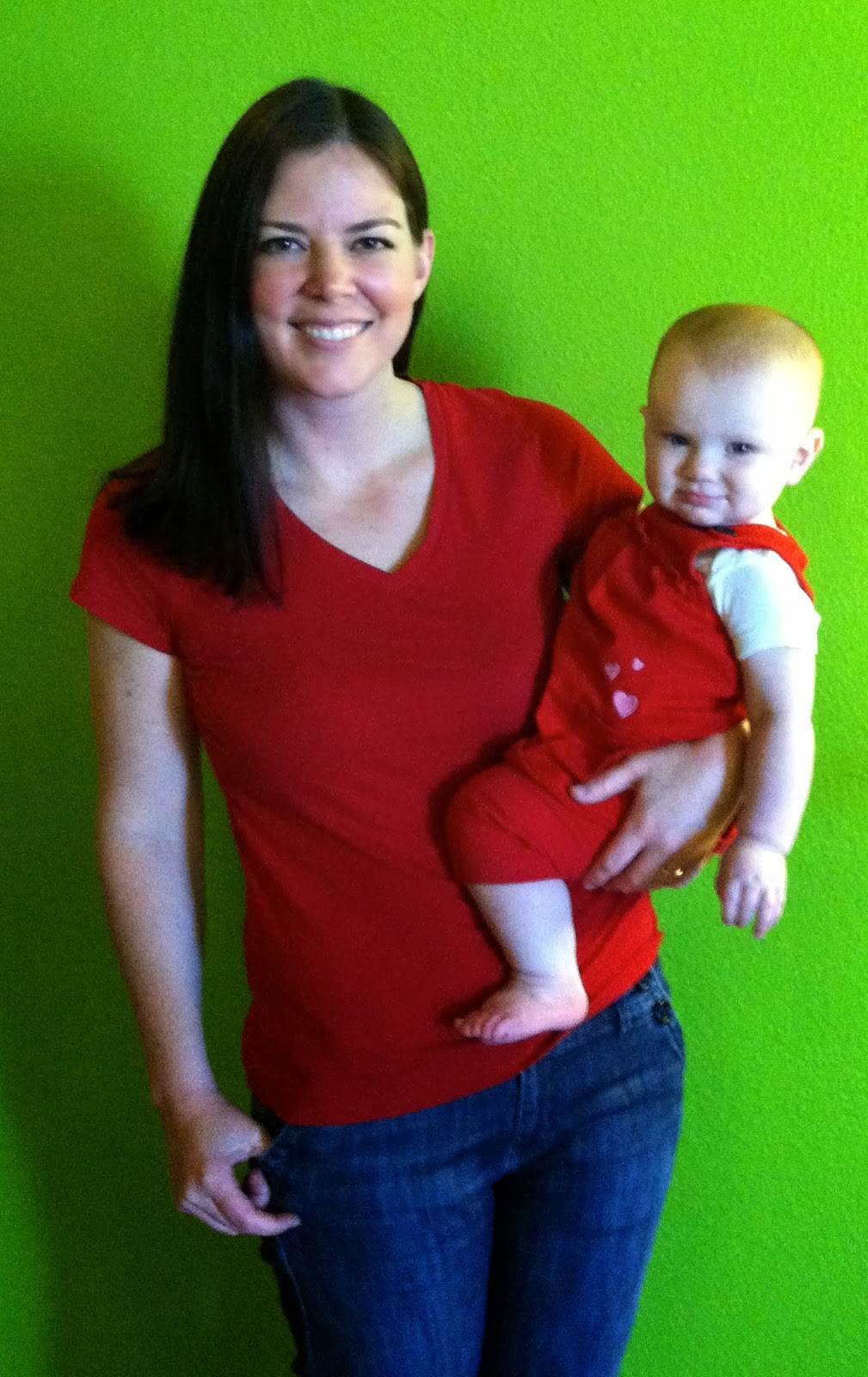 Me and my little sweetheart on Valentine's Day 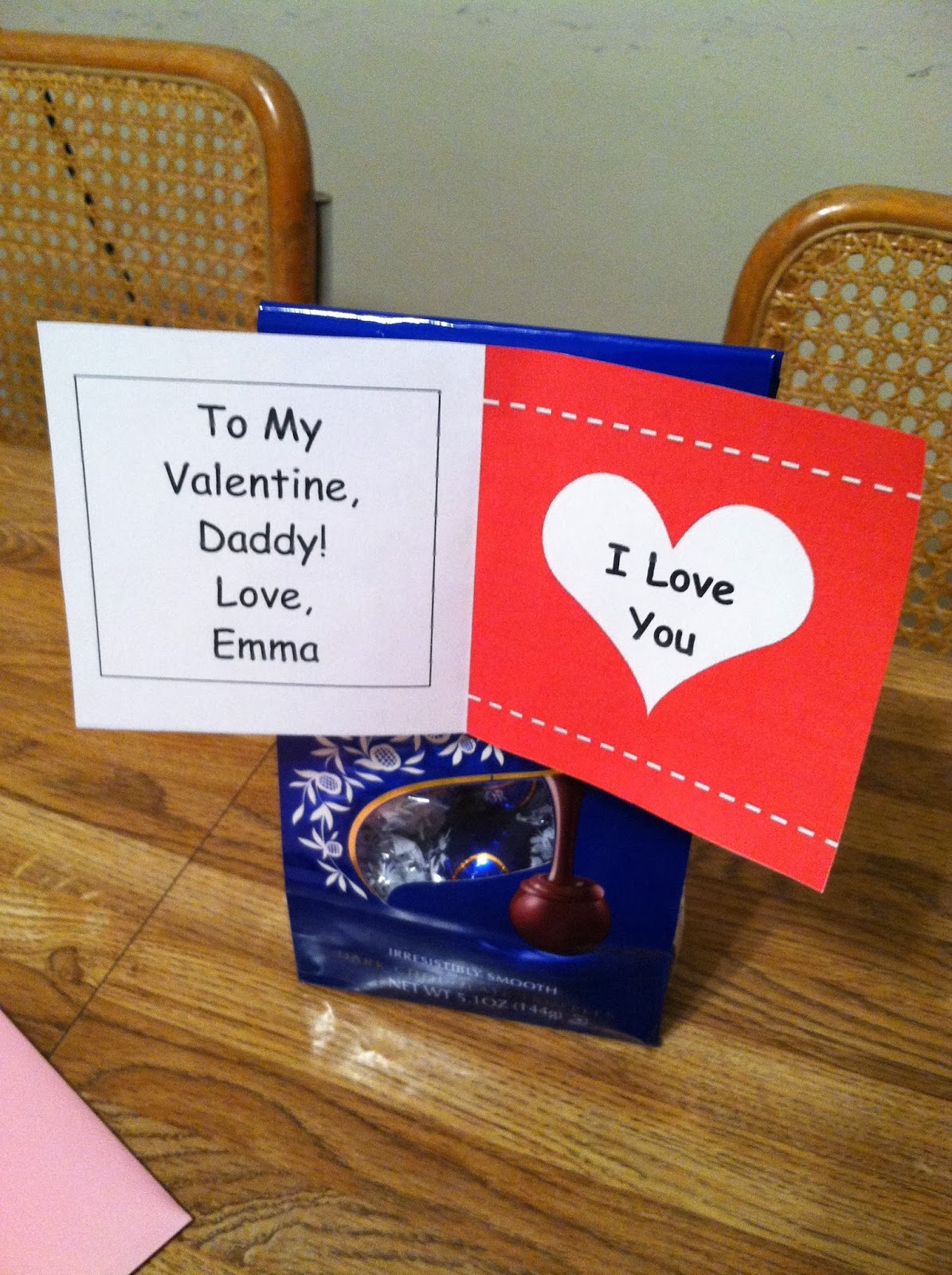 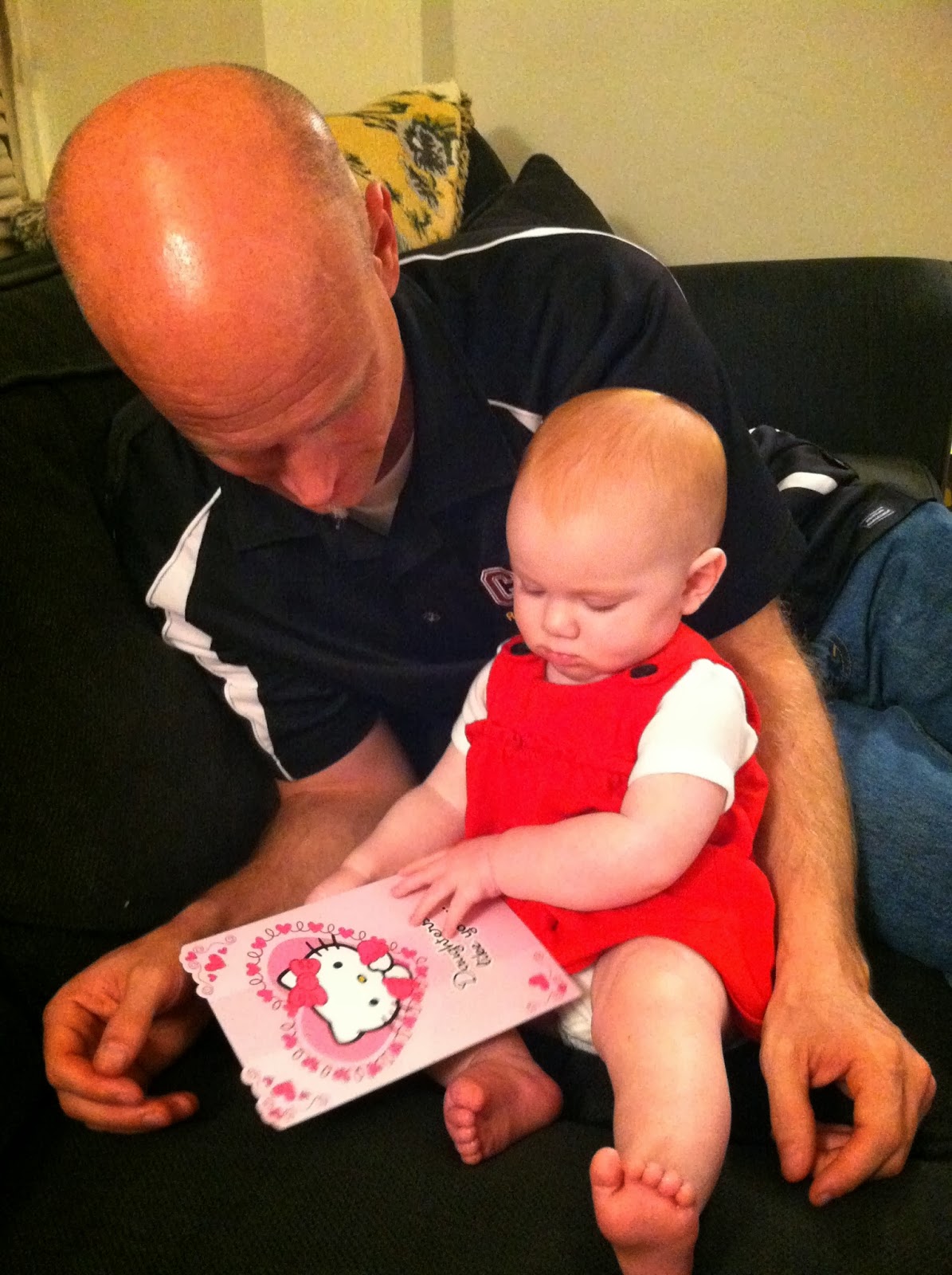 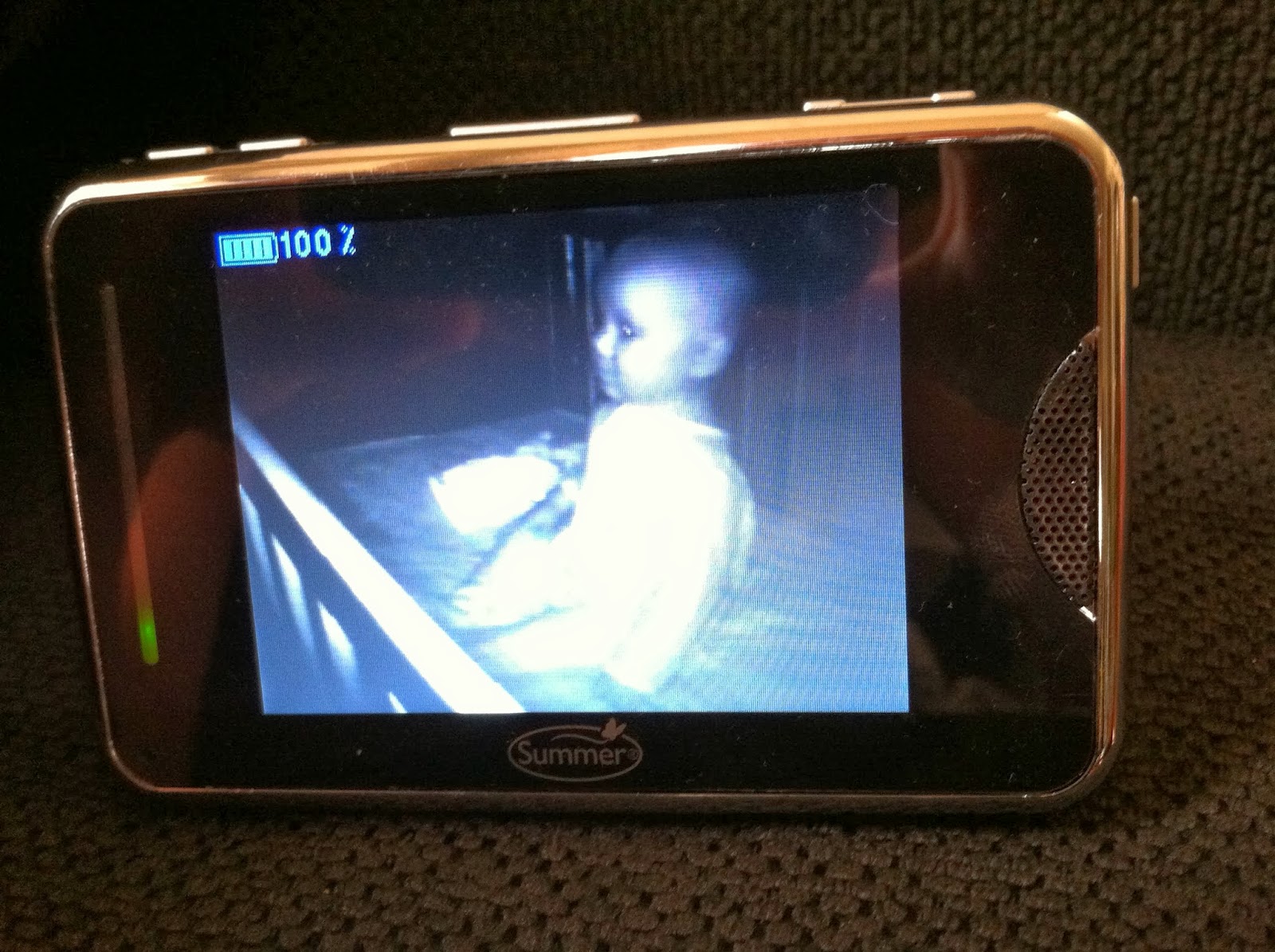 This is my view on our new monitor first thing in the morning. If she's sitting up, it's time to get her out of the crib. 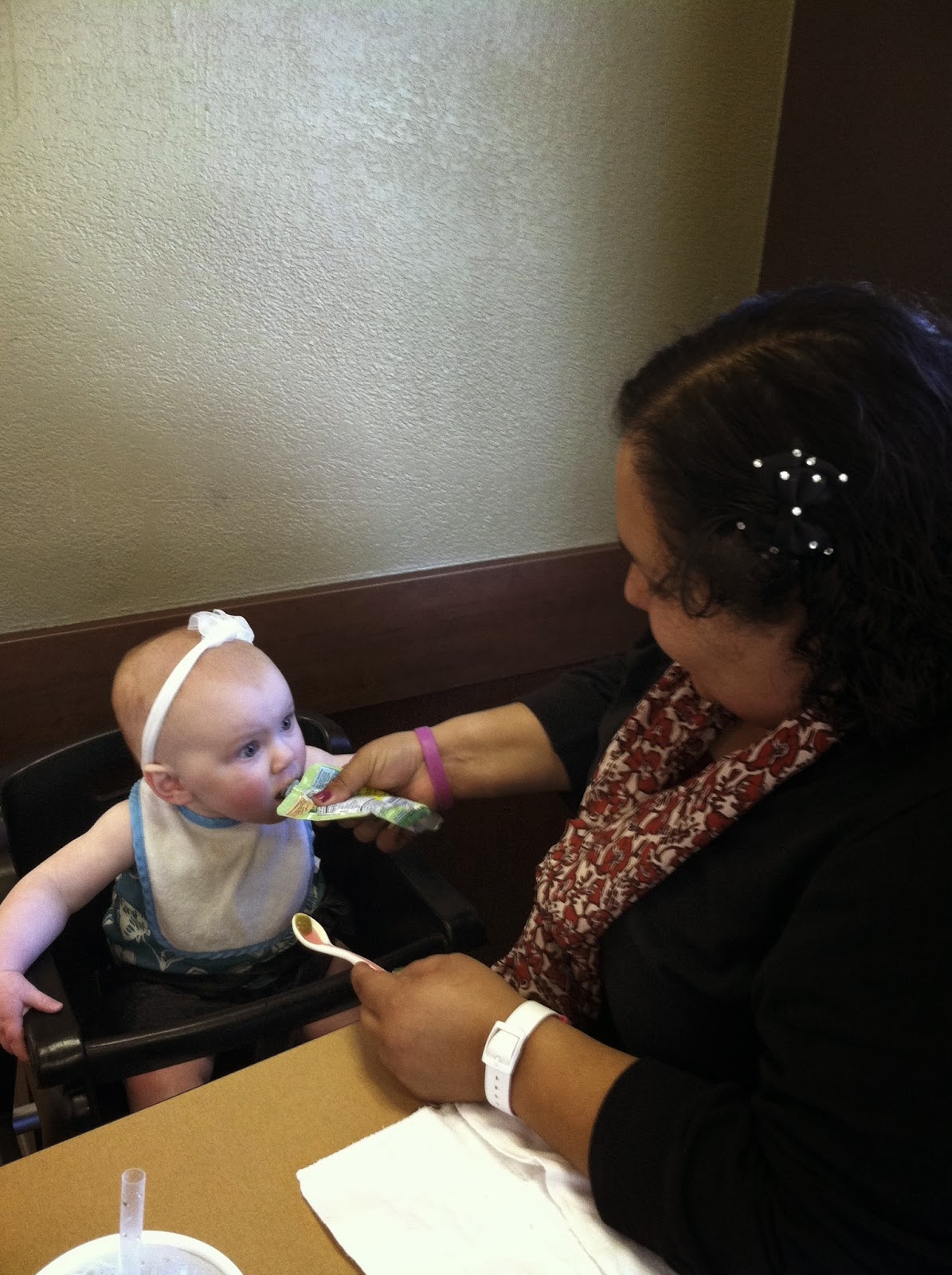 Dan's school assistant, Marianna, went to lunch with us one day and I got a picture of her feeding Emma from a baby food pouch. 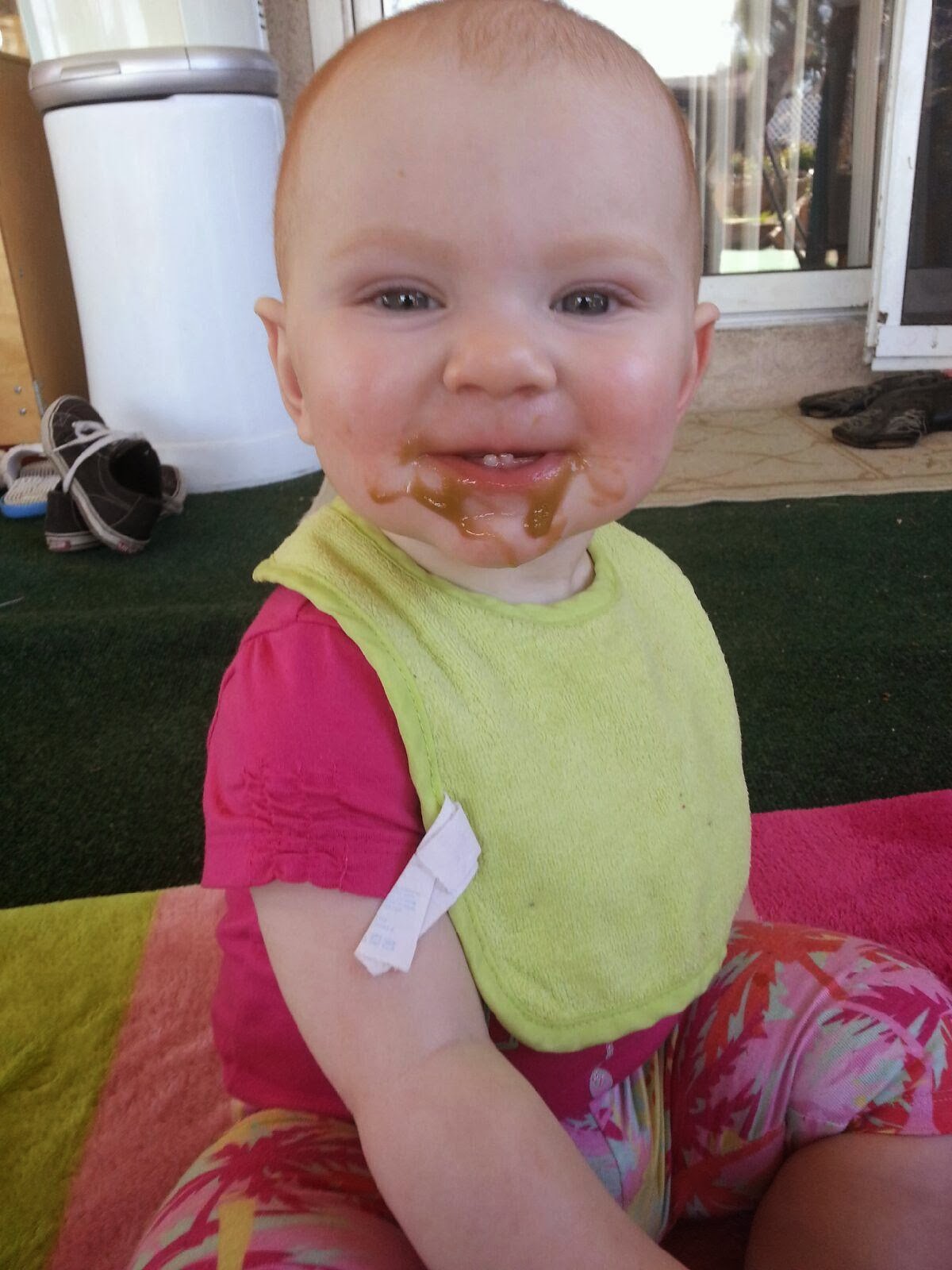 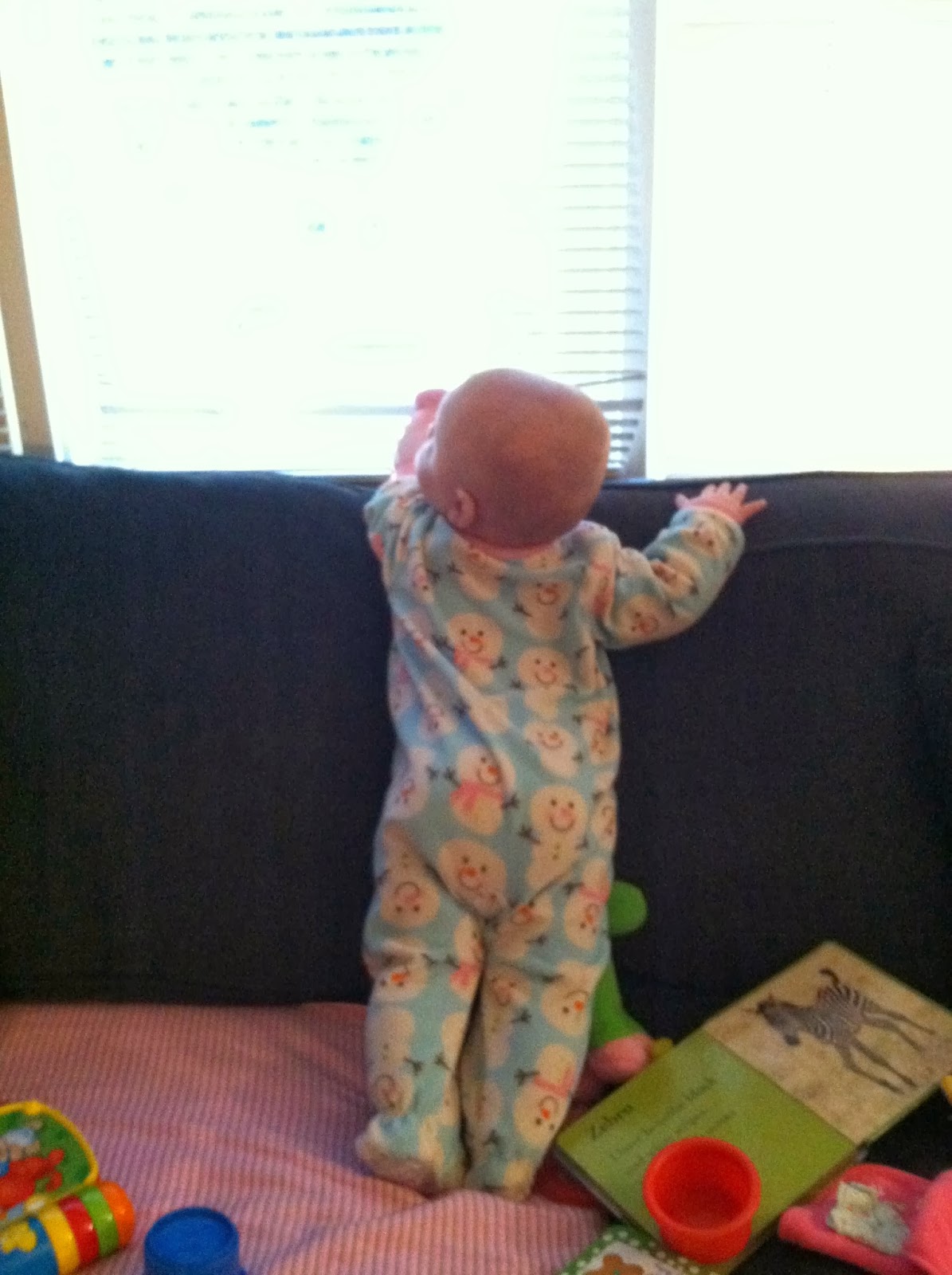 I helped her pull up to look out the window, but as often as she's practicing, it won't be long before she's doing it on her own. 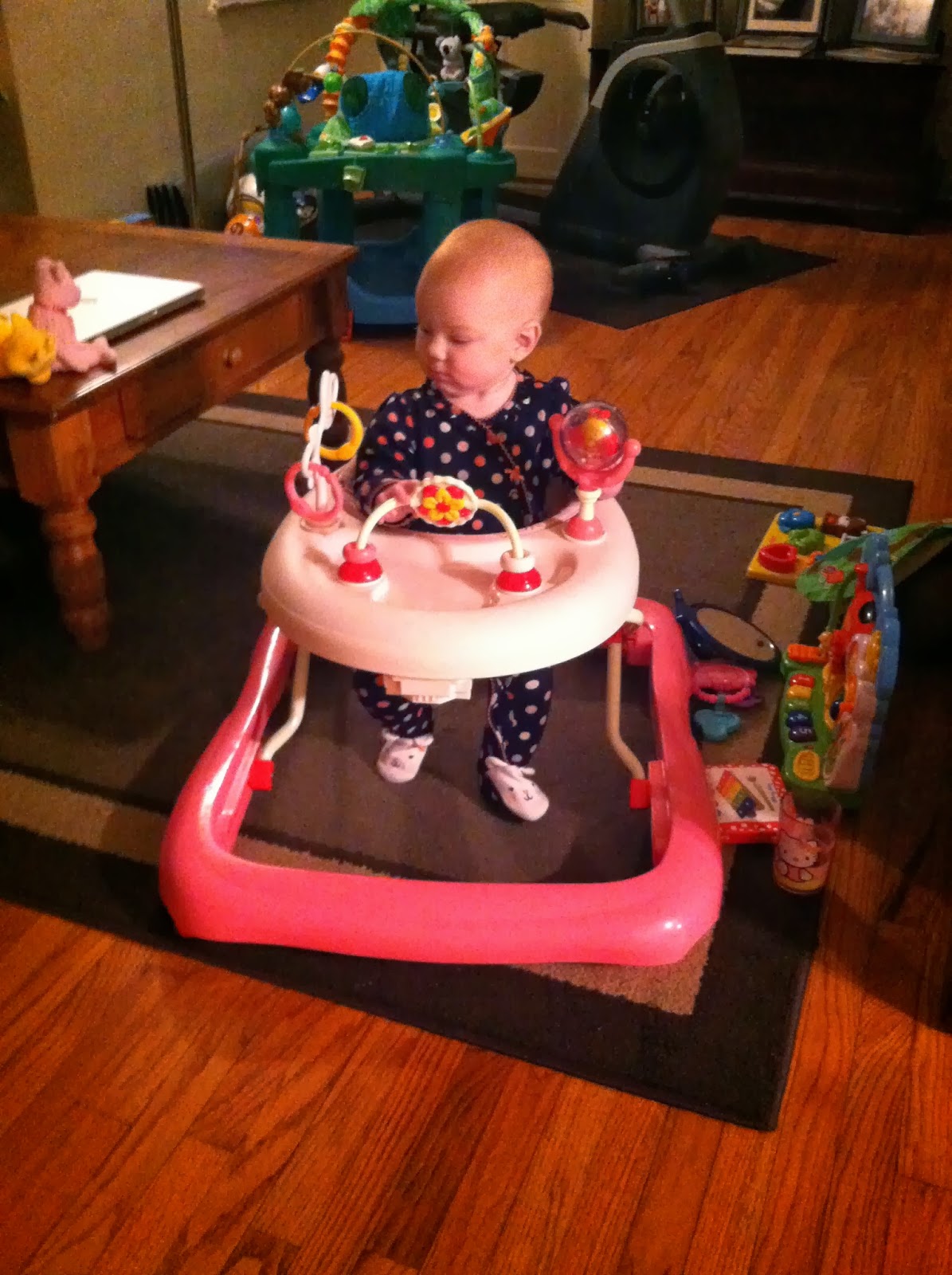 Her babysitter, Sue, bought her a walker. So far she can only go backwards in it, but she enjoys playing in it. 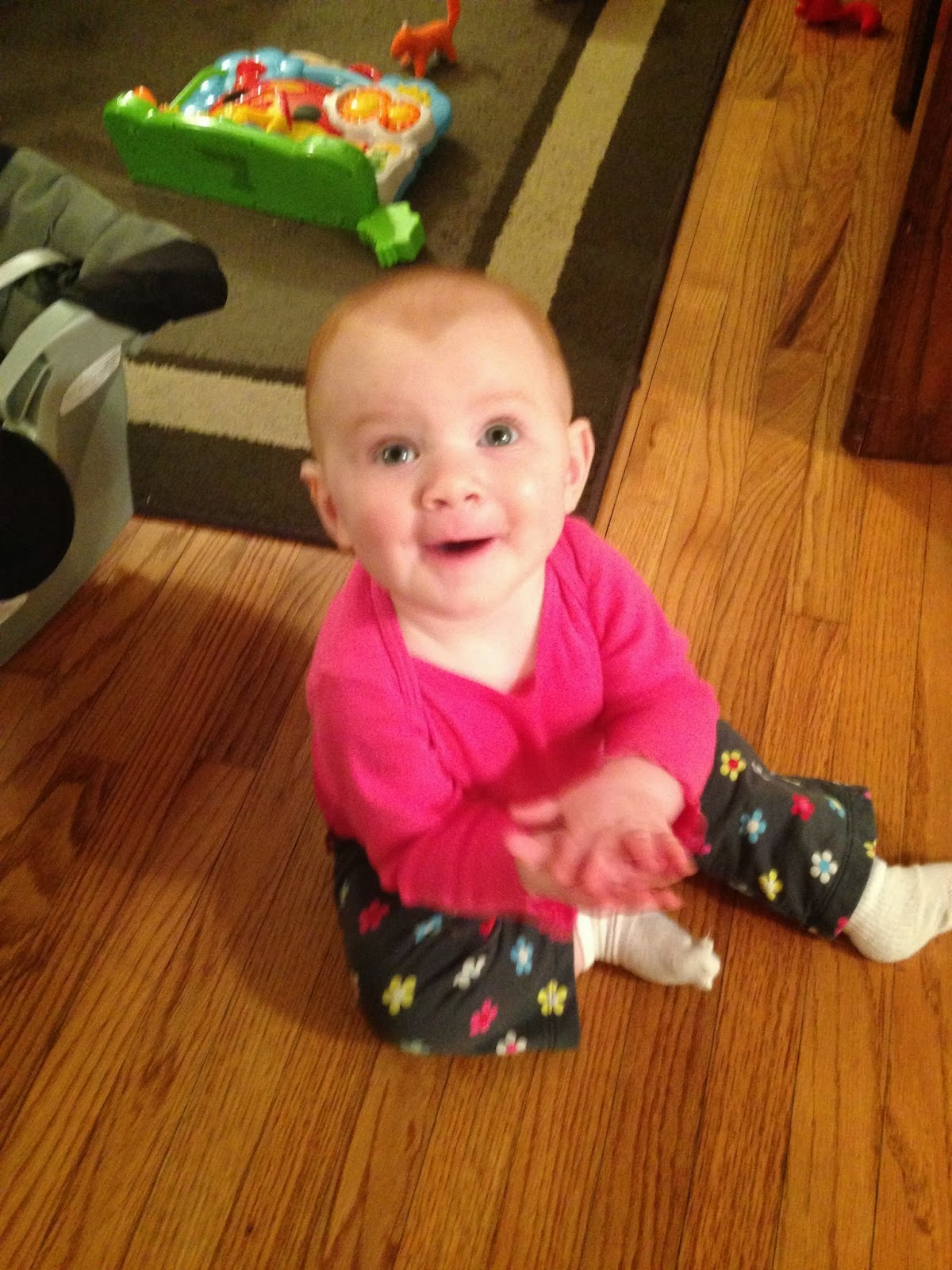 One of her new "tricks" - clapping and saying "ahhhhh!" 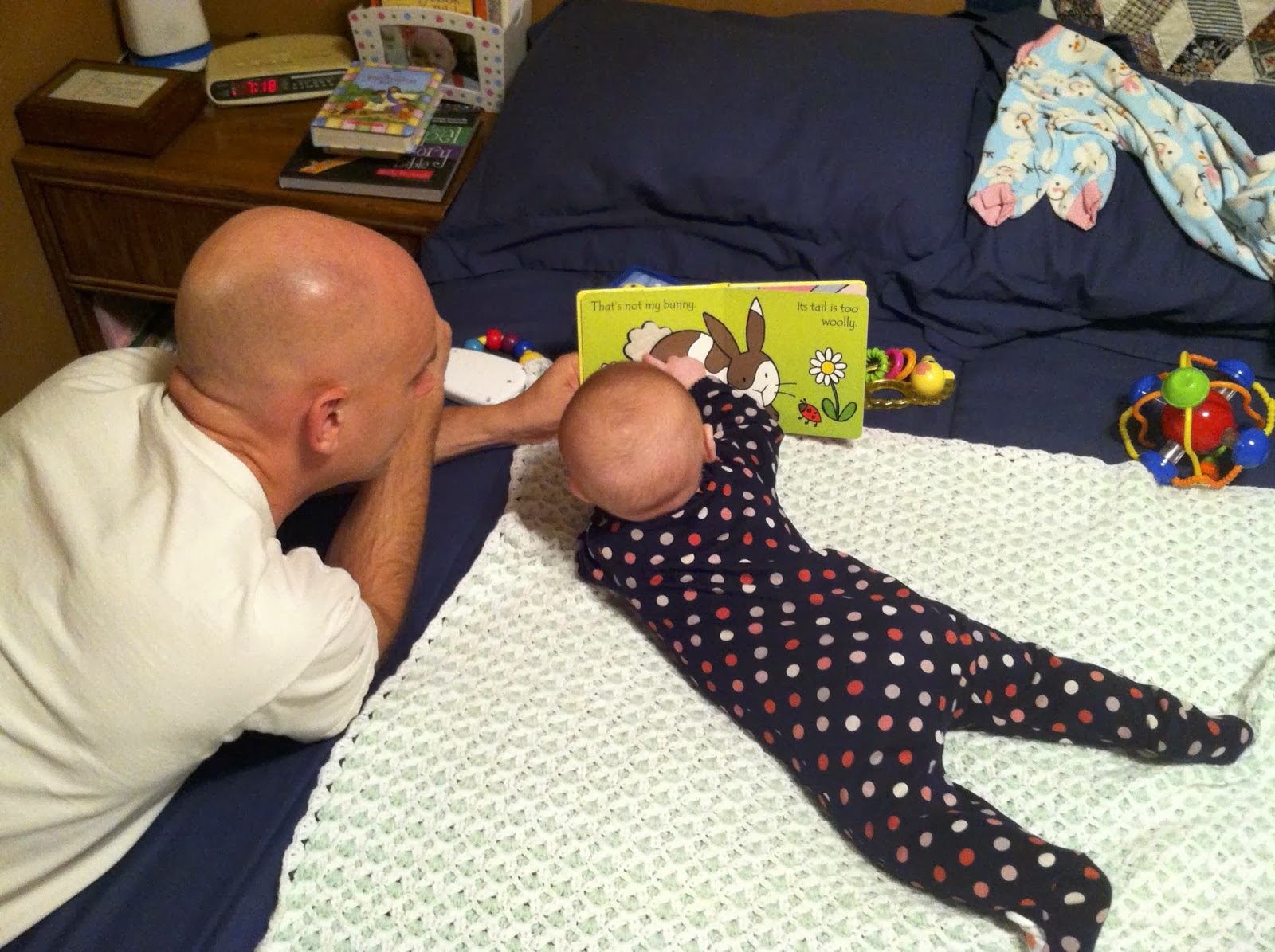 She still loves reading all her books 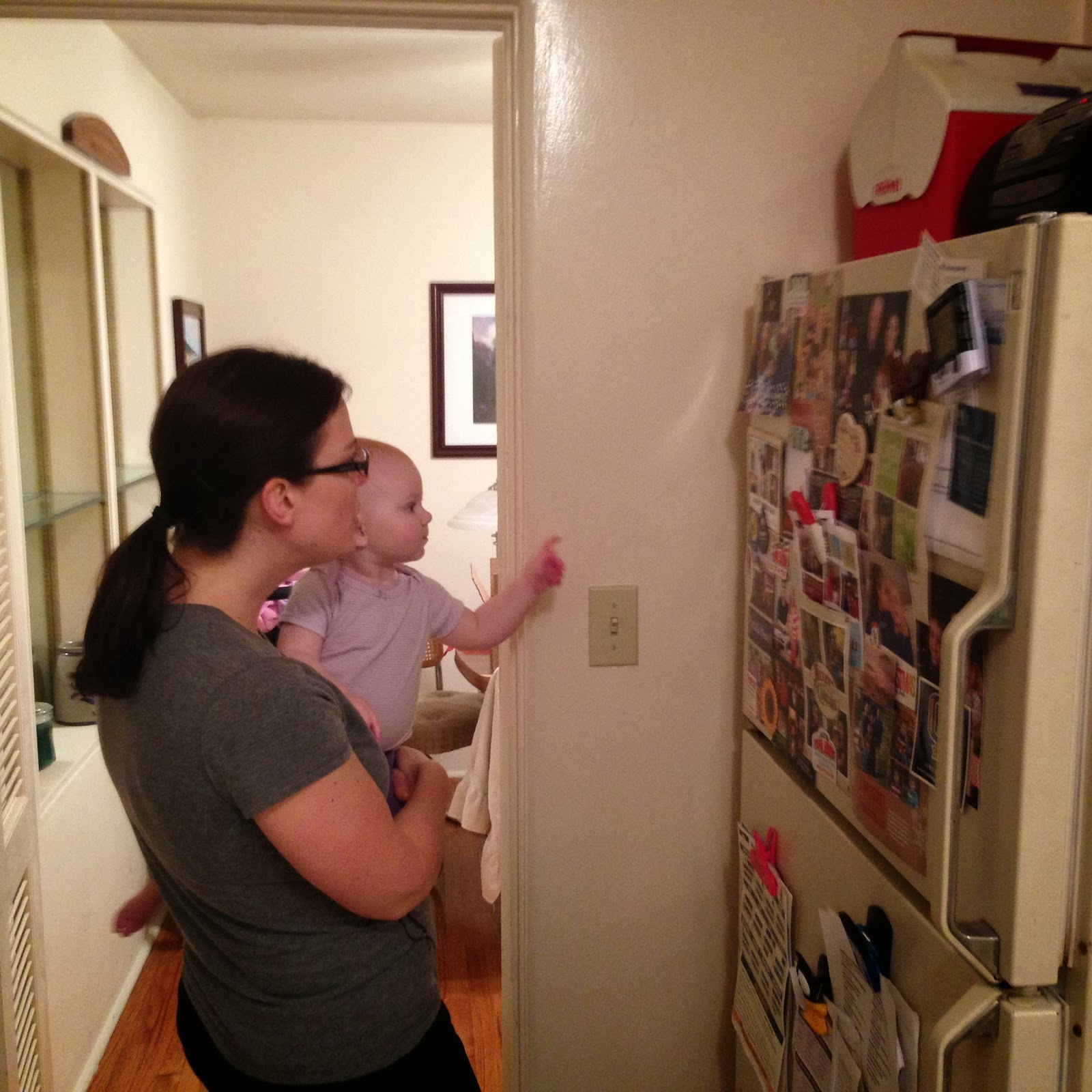 She gets really excited every time we go in the kitchen because she gets to say hi to the kids on our friends' Christmas cards. They might stay on the fridge all year because she gets such a kick out of seeing them. 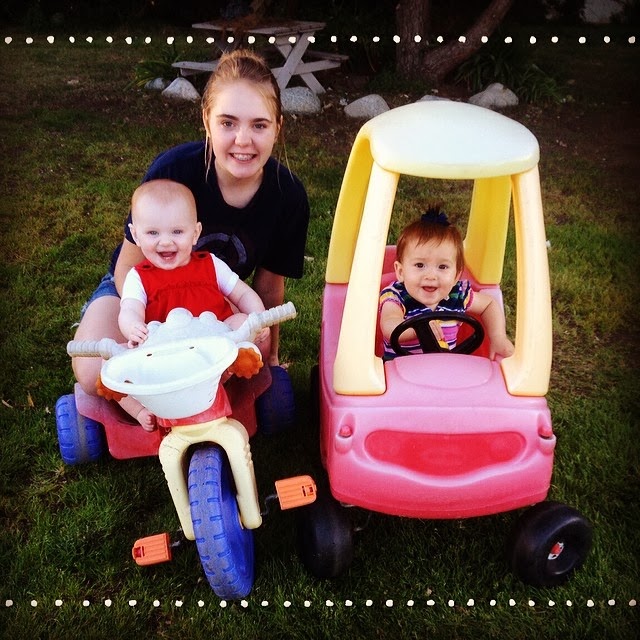 A little preview of Emma and her best friend, Ellie, in their teenage years! 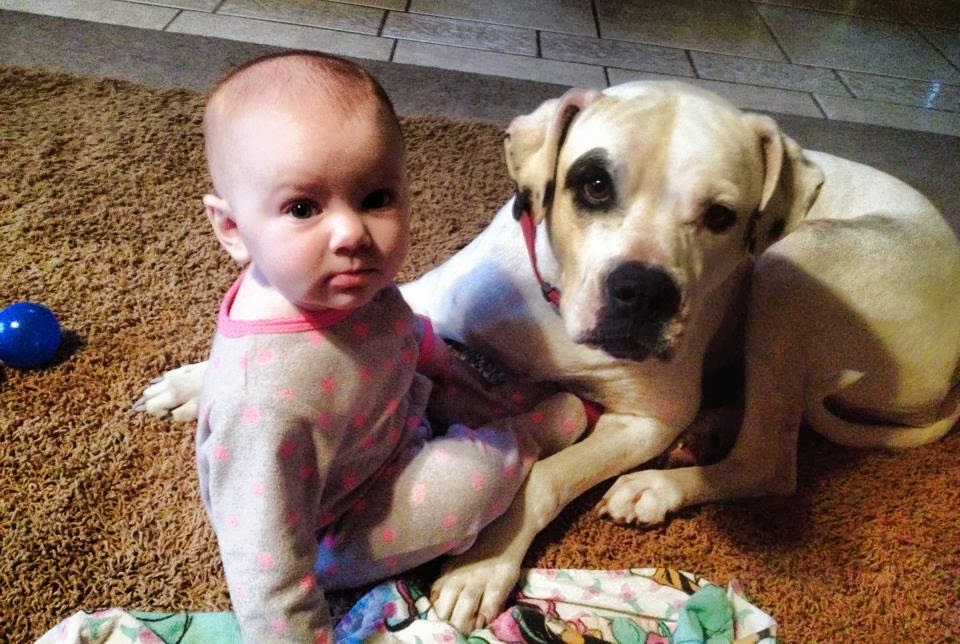 Sue has two dogs, and Emma LOVES them! When we take her on walks, the highlight is seeing dogs out for a walk in the neighborhood. 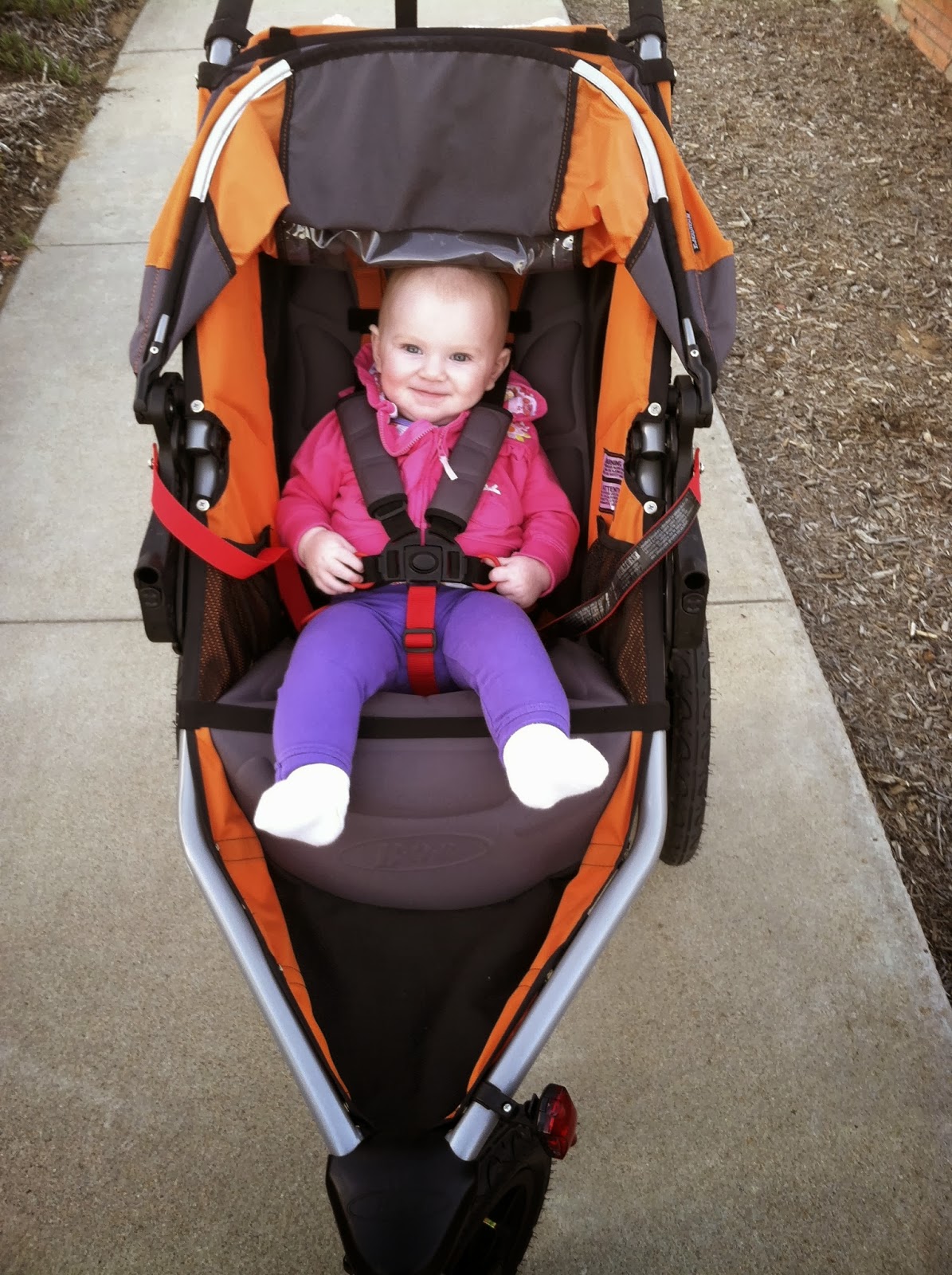 She's been riding normally in the stroller more often (instead of in her car seat on top of the stroller). It's much lighter to push when I'm running and she can see the neighborhood dogs better this way. It's a win-win. 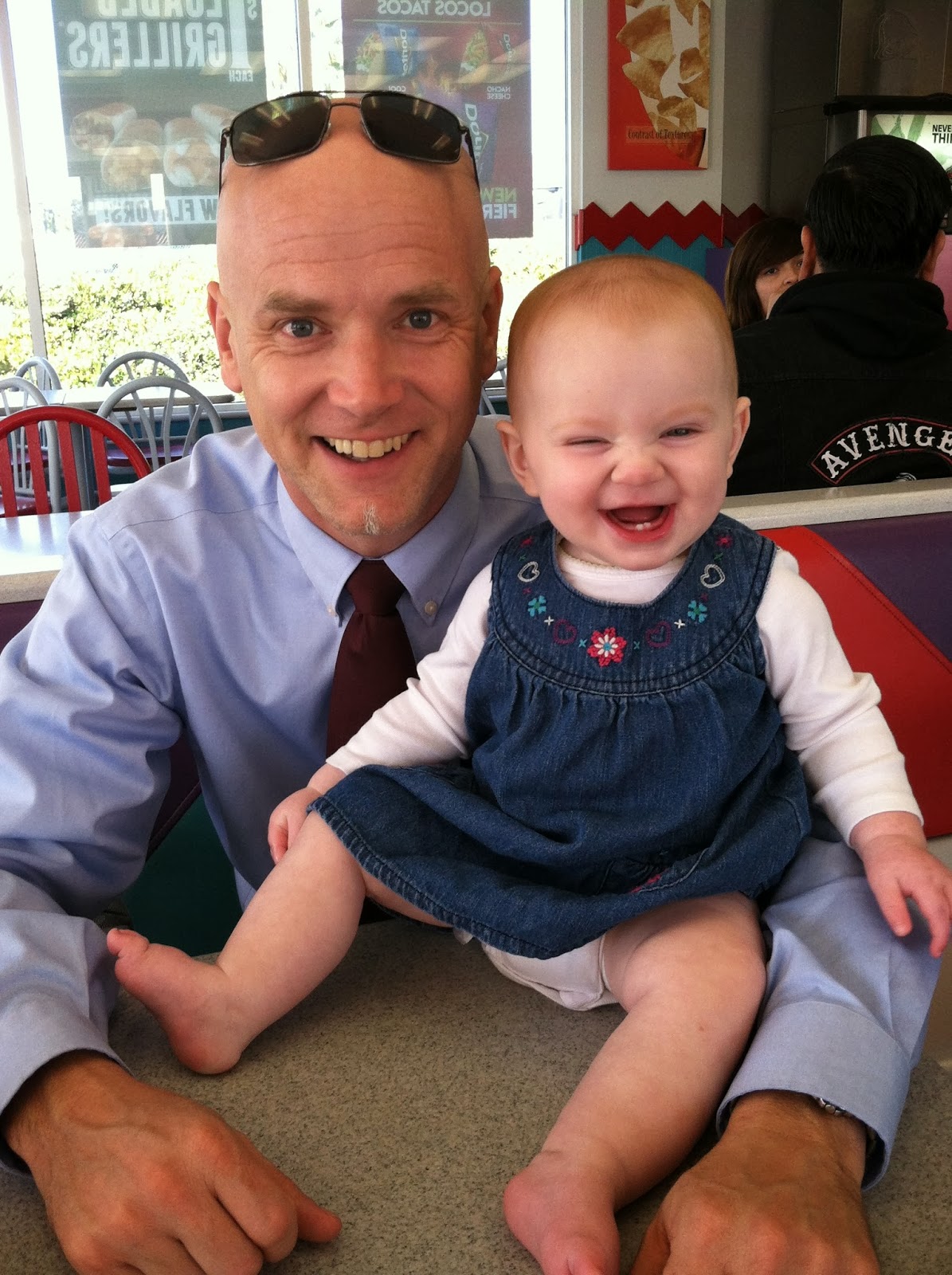 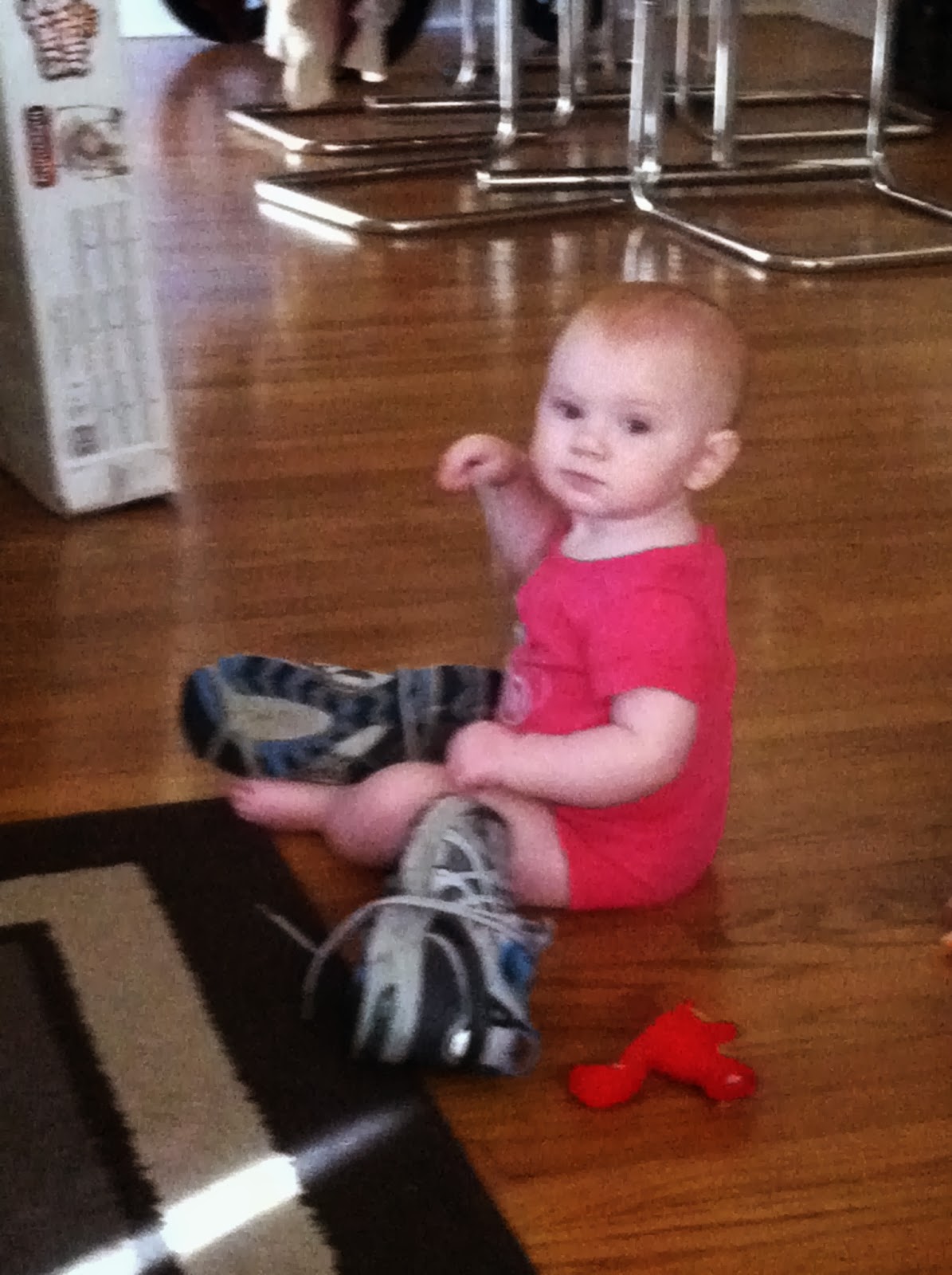 Since she's learned to crawl, she's discovered that our house is full of fascinating treasures. Like tennis shoes. 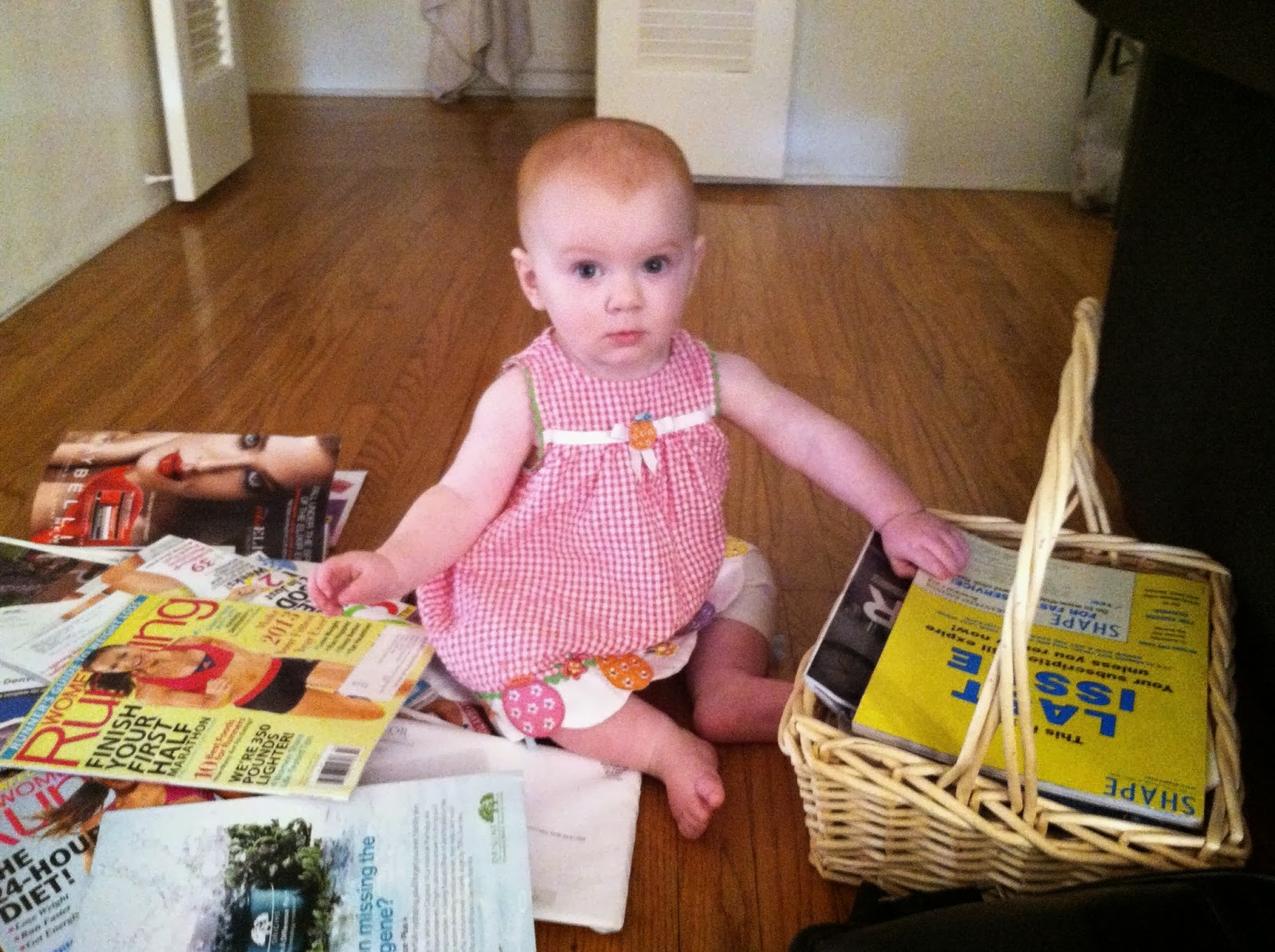 And piles of magazines that clearly need to be organized, Emma-style. 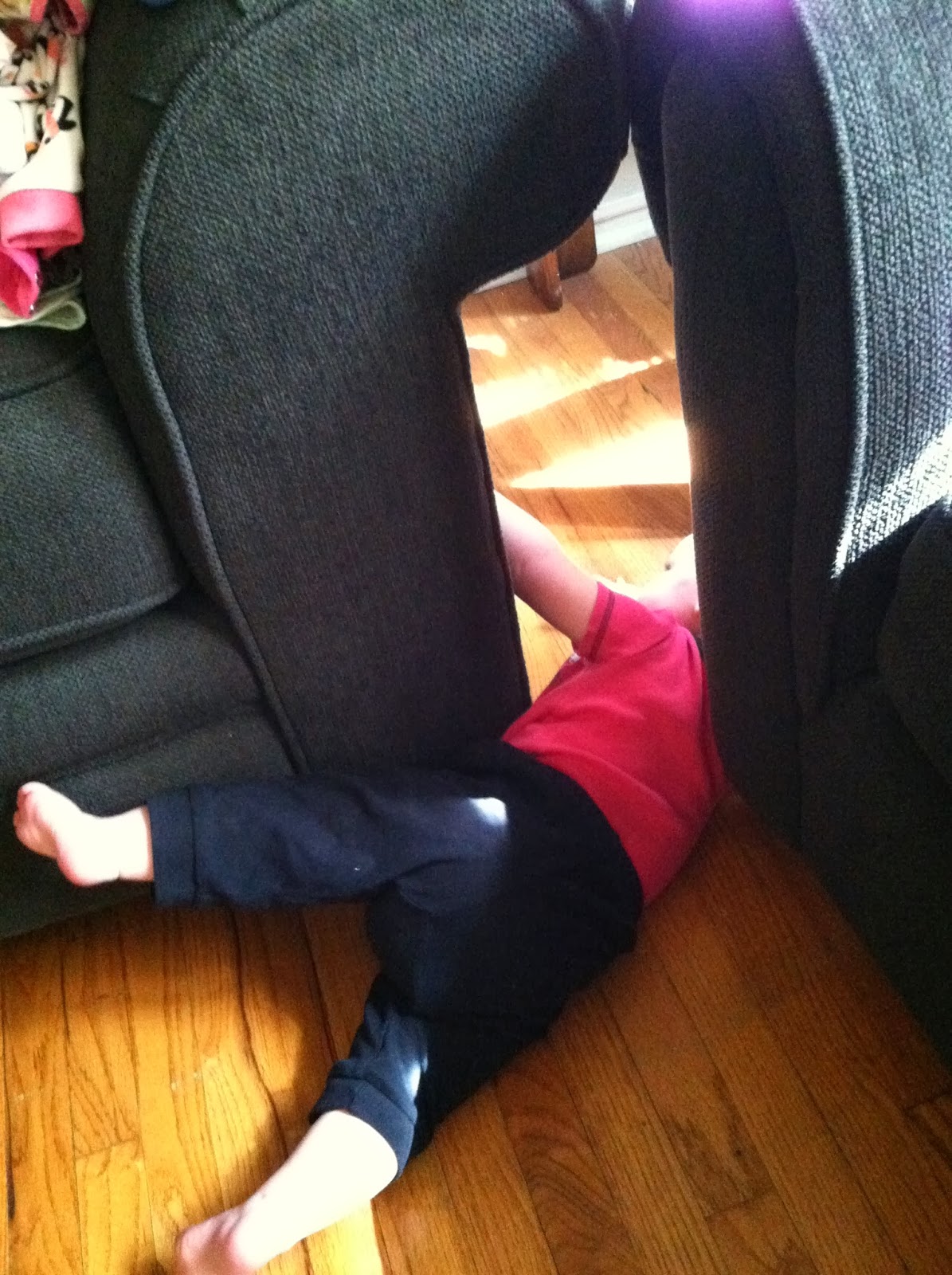 She's also learning some of the hazards, like banging her head on table edges and getting stuck between the couches because her diaper butt is too big to fit through. 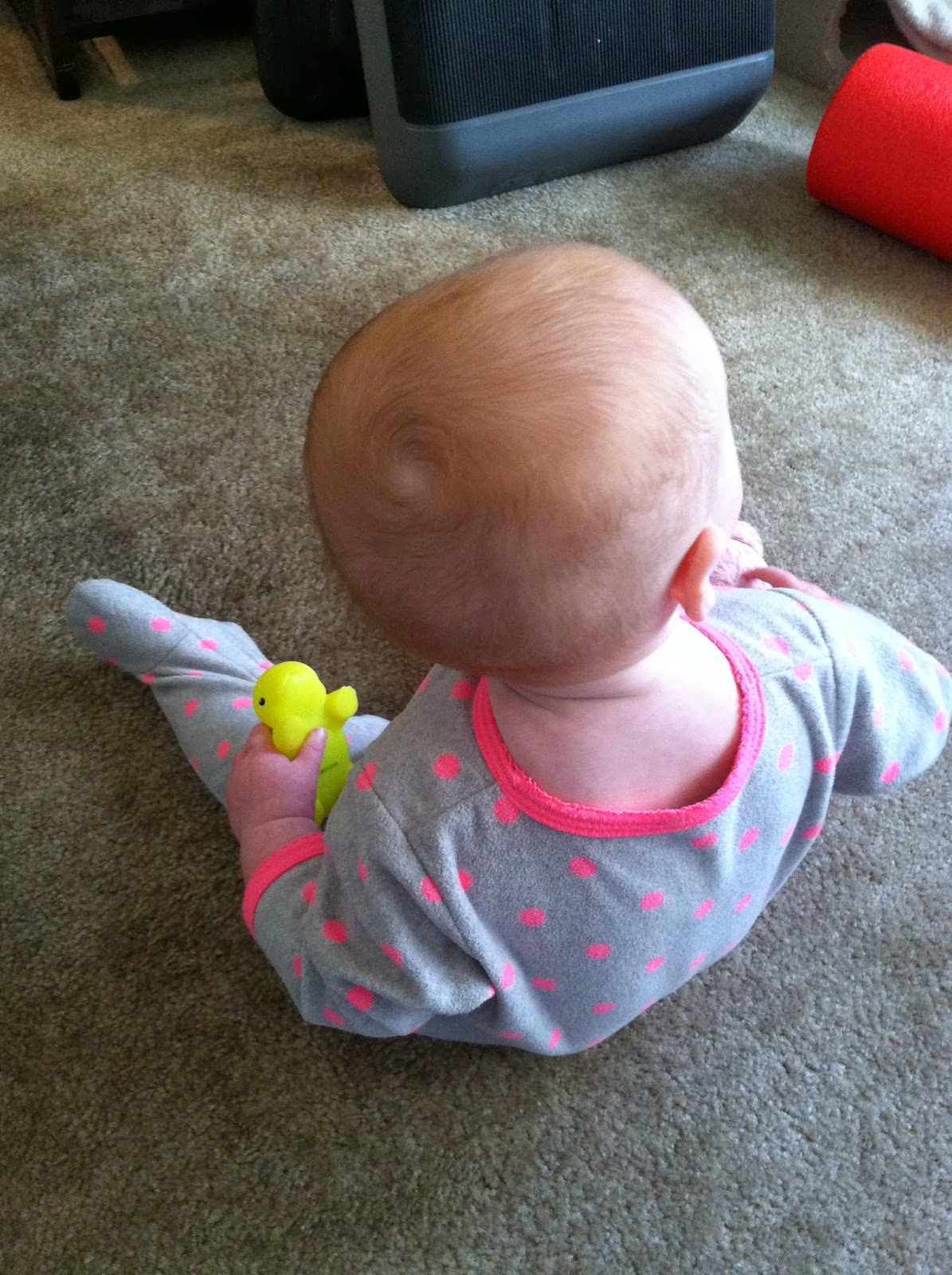 She still doesn't have much hair, but it's thickening fast enough that we may not get to see that pretty swirl on the back of her head for too much longer. 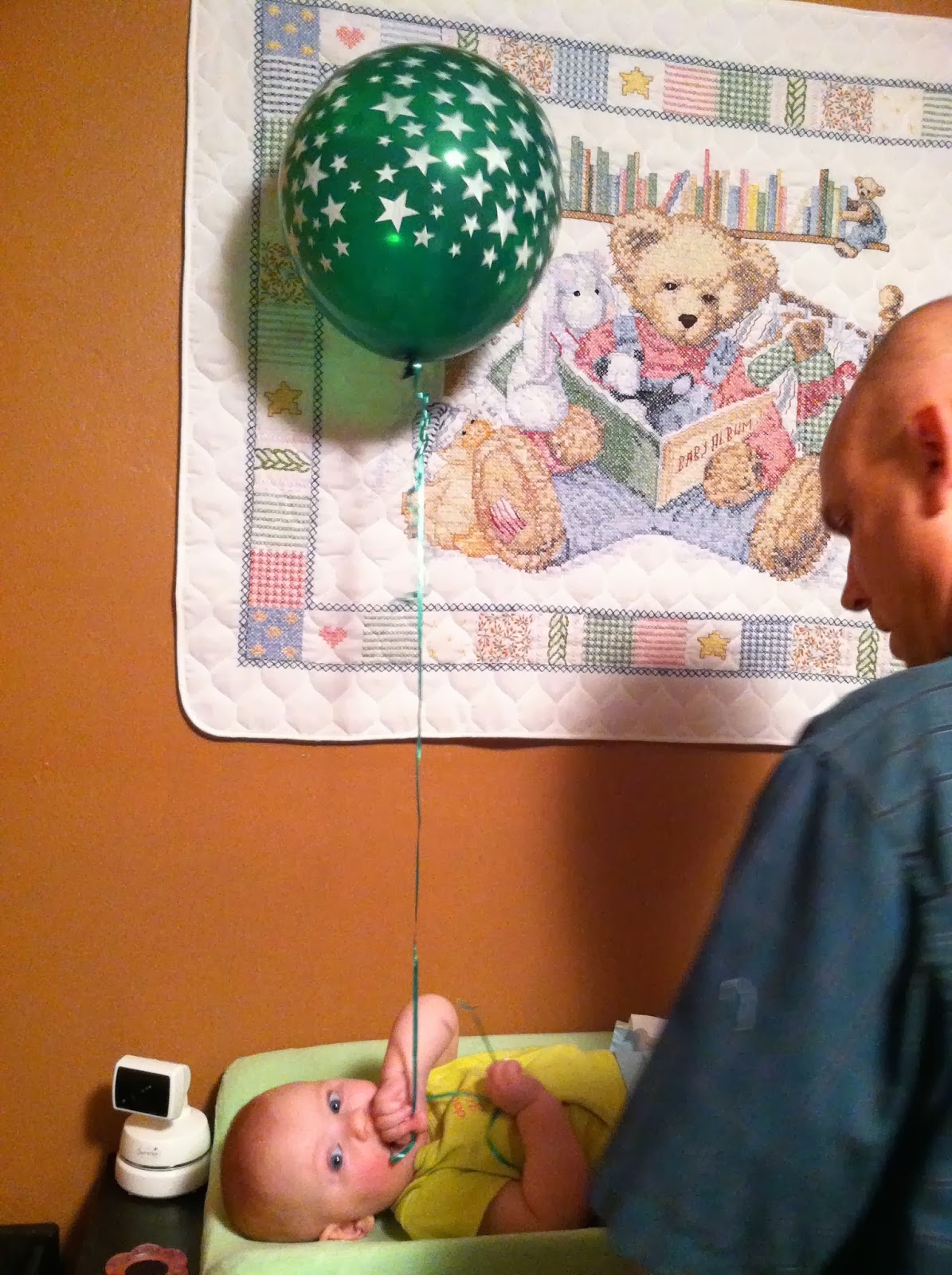 She's officially outgrown her diaper changing pad, since she was consistently trying to roll off it during diaper changes. We decided it's flirting with disaster to have one hand holding a dirty diaper, leaving one free hand to save the naked baby from plummeting to the floor. So now we change her on a broader surface like the bed or floor, just in case she rolls. This picture was the last time Dan changed her on the pad, only because she was fascinated enough with her balloon that she laid still. 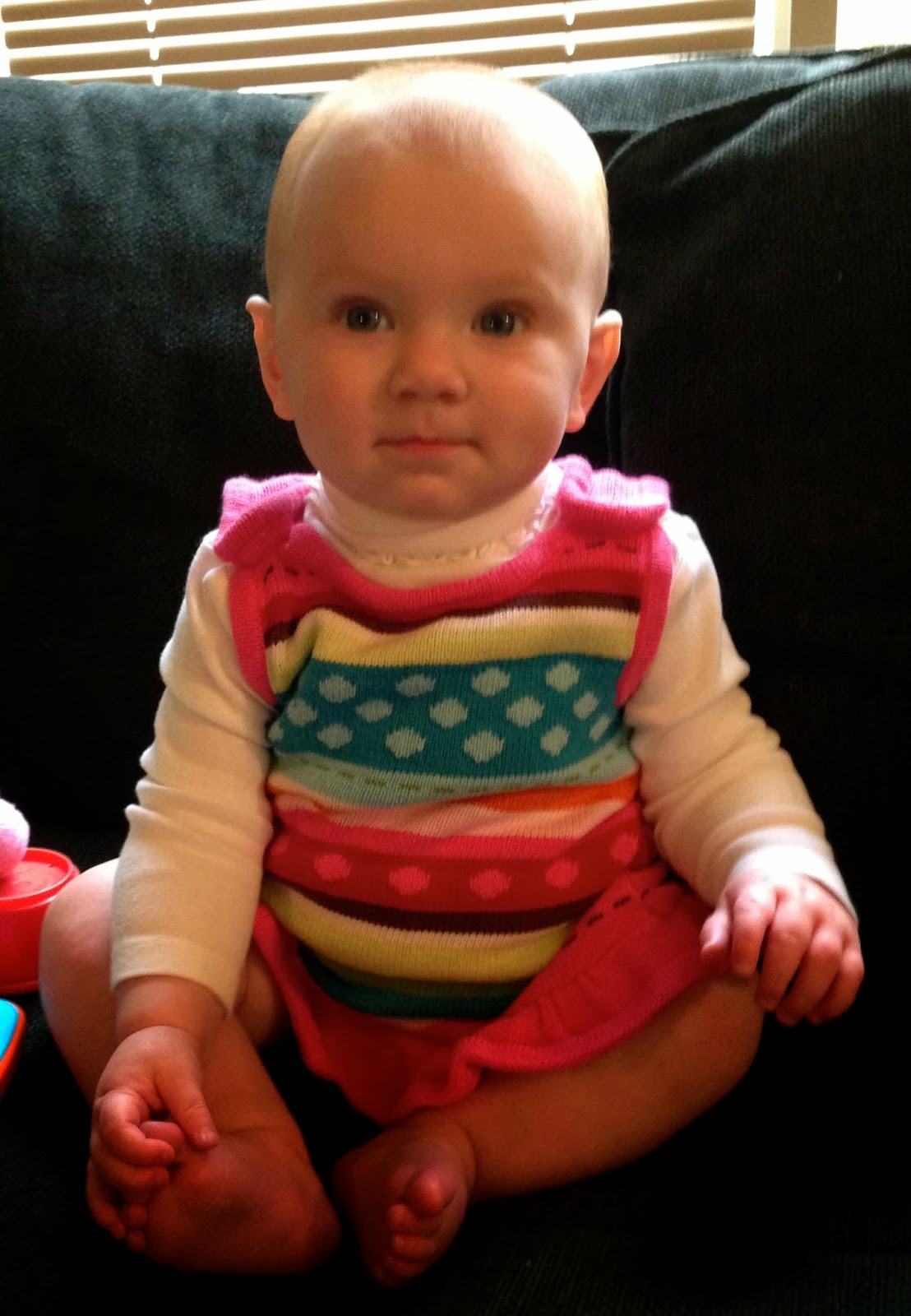 Our little girl is growing up way too fast! We're in awe of how quickly she changes in one month's time, but we're enjoying each stage as it comes.
Posted by The Jesters at 4:42 PM