Emma had her first surgery at three months old. I don't think I have ever dreaded anything more in my life, and it was a relatively minor procedure!  God bless all of you who have watched your kids go through much more serious things! It was a great, but hard reminder to me that God sustains her life every single day; not just on the day when she has a medical procedure.  Dan was good about reminding me that Emma is "on loan" to us from God.  She is not ours to keep, and we need to trust Him with her life every day.

The reason for her surgery was that she was born with a ureterocele in her right ureter, which had grown large enough that it also took up a lot of space in her bladder. It was causing infected fluid to back up in her system, which was the cause of her urinary tract infection earlier this month.  Her urologist took a look at her latest kidney/bladder ultrasound and scheduled her surgery the following week, since he thought that leaving it untreated would result in more infections.  He used a scope through her urethra to find the ureterocele and puncture it with small holes to allow the infected fluid to drain out.  He said the procedure was successful, and she hasn't shown any signs of infection post-surgery. Although he thinks this is just a short-term fix, we pray it will last a good long time so she won't have to deal with any more infections or surgeries until she's much older.

For five days prior to surgery, we had to give her a very strong antibiotic twice a day. It had a nasty, gritty consistency that was messy to feed her with a syringe, but it was impossible to get the stuff to go through a bottle. Also, it couldn't be mixed with milk, so we couldn't feed her for a couple of hours before or after we gave her the medicine. Through it all, Emma was such a little trooper! She fortunately takes after her Nana and Uncle Paul and will eat anything. :) She never complained about the taste or texture of the medicine - she just wanted more to eat after we had given it to her. So we gave her small amounts of water to drink afterwards sometimes when she couldn't be distracted in another way.  The medicine made her very sleepy the first three days she took it.  She'd get a spaced out look on her face shortly after drinking it, then fall deeply asleep for about three hours.  This was unusual behavior for her in the middle of the day, but it was the only side effect we saw the whole time, and it wore off after a few days.

Since she's so young, they scheduled her surgery first thing in the morning and we checked into the hospital at 5:30 a.m. She couldn't have milk after midnight the night before, so we were preparing ourselves for a very unhappy baby! But she ended up being just fine until about 7:15, when nothing else could distract her from the fact that she was HUNGRY! The pediatric anesthesiologist was running late that morning, so she probably would've been okay if she hadn't had to wait an extra 30 minutes.  One thing we were very thankful for is that they didn't insert her catheter or IV until after she was under anesthesia.  She had a prior procedure where they did both without any pain medications, and all three of us were a wreck by the end of it!

We're very thankful that it's over and God protected her and allowed the procedure to go well!  We'd appreciate your prayers that it will be effective for the long-term to prevent future infections. 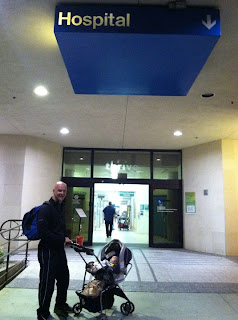 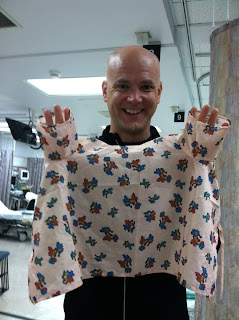 Dan trying on her hospital gown for size :) 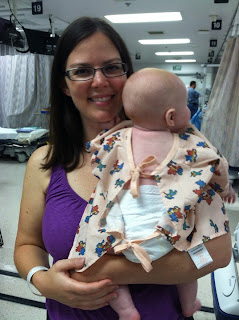 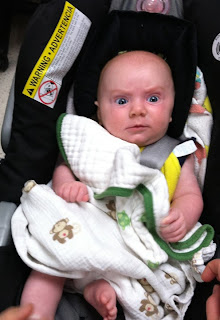 This was her reaction when we explained where the doctor was going to insert the scope. ha ha! 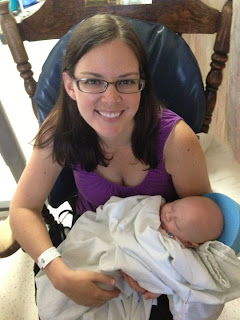 I got to hold her right after surgery until she woke up. I was so, so happy to have her in my arms! 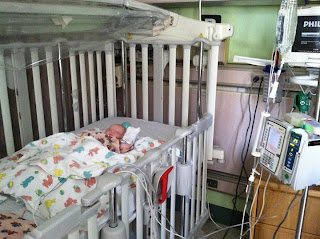 She was transferred to a hospital room to stay the night for observation.  There was another little girl in the bed next to her who was released during the day, so we had the room to ourselves that night. We could hold her as much as we wanted, but it was tricky and pretty uncomfortable for her with all those tubes and wires hanging from her body! 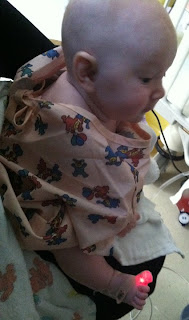 She did get a bright red monitor light on her big toe, though, which was an endless source of fascination 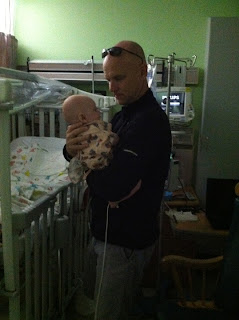 Dan saying goodnight before he left to go home for the night.  I got to sleep on the horribly uncomfortable chair/cot thing that Dan and my mom dealt with when Emma and I stayed in the hospital after delivery. 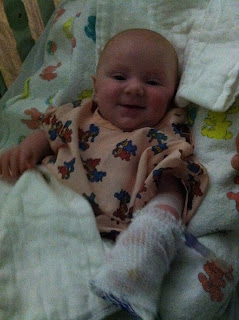 Through everything, she had plenty of smiles for us, the doctors, and nurses.  She has such a sweet personality, and she gained a lot of fans by the time we left.

Bless her little heart! What a strong little girl to go through all of that - and what a strong mommy! I will be praying for all of you, that there won't be any more procedures until she is older, but mostly for the Lord to heal her so more procedures aren't necessary. Love ya'll!

Oh my goodness! Just catching up! So thankful that the procedure went well and we will continue to lift her up in prayer! Could not agree more that it is so hard to watch your baby go through anything at the hospital!

So glad it went well. Hope it fixes the issue a long time. She's very expressive! (And cute!)

I'm so glad that everything went well. She is such a strong little girl. I'm thankful that you guys had a great team of doctors, but will also pray that more procedures aren't necessary. I love the facial expressions she makes. She is just darling. God has given you such a gift.