The Jester family of three!!!! 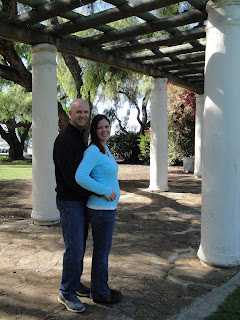 We're excited to announce that we're expecting Baby Jester on April 21st!  We've felt all along that God has showered our marriage with blessings, and He's given us another amazing gift and reason to praise Him!

In answer to the most common questions we've gotten:
We're thrilled about this new adventure in life, and we'd really appreciate your prayers as we prepare for parenthood!
Posted by The Jesters at 1:40 PM

Can't even begin to tell you how happy I am for you guys. Will be praying and looking forward to meeting the little boy or girl. Blessings to you guys. We love you!

I am so excited for you! I always heard that teachers had the hardest time with baby names. Looking forward to seeing you guys around the holidays! :)

I am SO excited for ya'll!!! Praising the Lord for this precious gift in your lives. Cannot wait to hear if it is a boy or a girl and all the fun that is yet to come. Love you both dearly and thrilled for you!

Wonderful news!!! So glad you have been feeling well and being hungry is a good thing. I used to always carry a bag of nuts, granola bars and dried fruit just in case I had the munchies. It helped!

Praying for you!
Julia Shiras

We are SOOOO excited for you THREE! Children are an amazing gift. Enjoy the ride! We'll be praying for you!

Hooray!!! So unbelievably excited for you guys!

Enjoy the free pass to gain weight! I've gained 45 pounds (seriously)-- well above the amount recommended by the internet--and I still have three weeks to go, yet my doctor has never said a single word about it. So I'm just going with it :)

Yay! You look absolutely gorgeous! Can't wait to squeeze the little bundle when he/she arrives. I have no doubt you'll have the running shoes back on in no time...I recommend a really good jogging stroller:-)
Love to all!
Kim and the Gang