Dan's sister Robin came to visit us for Memorial Day weekend, and we had so much fun! She arrived the evening of Dan's last day of school, so between the school year ending and having Robin in town to do fun things with, it really felt like summer vacation was here! We only had Saturday & Sunday to spend with her, but we made the most of it. We spent the day at SeaWorld on Saturday and had the best time seeing fun shows & animal exhibits. On Sunday after church, we went downtown for lunch and a musical - "MixTape - the musical journey through the 80s". Dan and I had seen it before and we knew Robin would love it since she grew up in the 80s and appreciates good music and cheesiness. :) It's such a good show if you're in San Diego & have the chance to see it. Dan & I enjoyed it even more the second time around. We made sure to take a nice long walk on the beach and stopped for frozen yogurt in the afternoon, and then we watched Dan play roller hockey that night. Robin had to fly out on Monday morning, but we were so glad she made it out to visit us! She has a full-time job and also serves as her church's music minister, so we know how hard it is for her to get away and we appreciate it! Here are some pictures of our fun times. 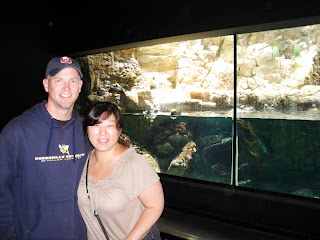 At the penguin & puffin exhibit at SeaWorld 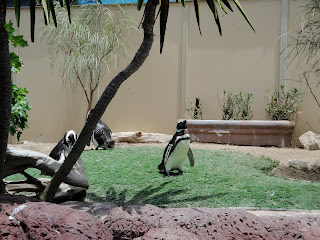 These penguins seemed to really enjoy the sunshine & warmth! 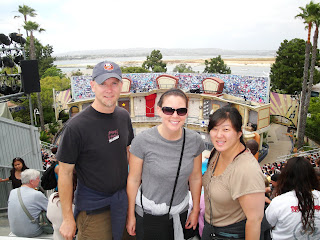 We saw two hilarious sea lion shows - one during the day and another show at night where the sea lions made fun of all the other SeaWorld shows. :) 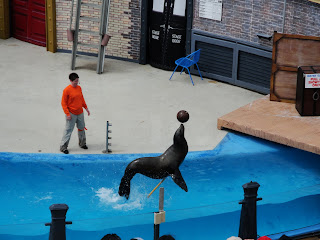 He didn't quite make it over the bar, but he kept the ball balanced on his nose! Impressive! 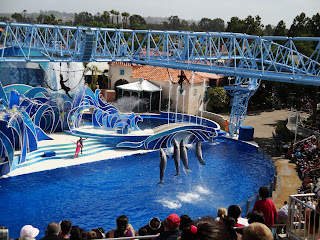 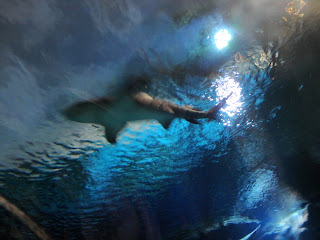 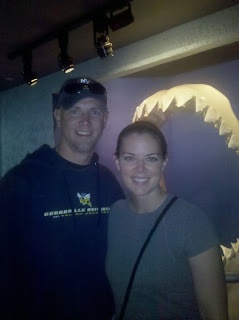 Then you get to see the world's largest (prehistoric) shark mouth! 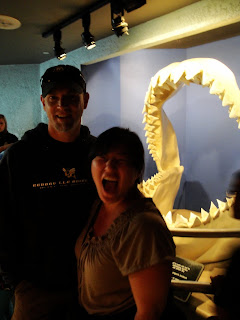 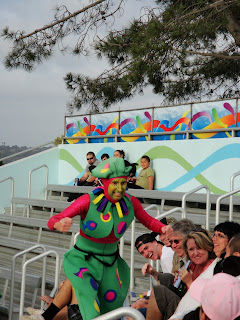 They have a summertime Cirque de la Mer show with clowns & acrobats. The preshow was hilarious, where they pulled a couple of burly men from the audience & had them prove their manliness in a variety of embarrassing ways. 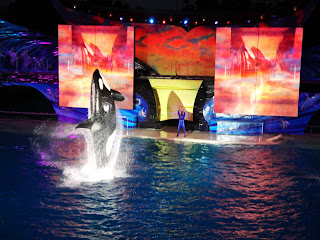 The most spectacular show of the day was of course the Shamu show! 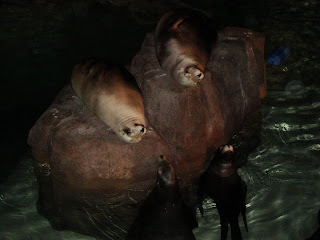 As we were waiting for the fireworks show at the end of the night, we spotted these sleeping seals. a-d-o-r-a-b-l-e. Dan & I have seen this fireworks show dozens of times from across the bay where we live, but this was the first time we saw it from inside SeaWorld with the music playing. 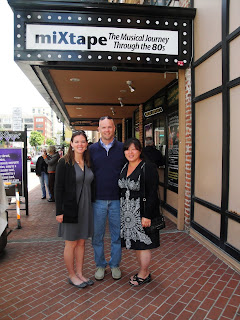 I LOVE Sea World... I think Brad and I need to make a trip out to San Diego once Tucker is old enough!

What fun!!! Sure wish hat we were going to get to the Campbell reunion! I'm sending a squeeze through my folks! Also want to hear all about the 1/2 marathon!

Oooo!!! Sea World! So spectacular! Would love, love to get out there to see that again (the zoo too), bring the kids... and see the Jesters of course!!! So glad ya'll got to spend a good weekend with family!

Oh, San DIego! I wish I were there. My neighbor/friend called me today from Mission Beach and I was immediately jealous. If I were at Mission Beach with her today, I'd be spending the evening playing spades with you guys tonight : ( Labor Day can't get here fast enough!!!