It's been a while since I've posted, but there were some very cool things that happened this month, so here's a run-down!

Dan's school (Calvary Christian Academy) started on Aug. 27th, and so far, it's been going amazingly smoothly. He worked really hard to have everything in order this summer, and God has blessed his efforts! His teachers and staff are great and the kids have good attitudes & behavior so far. His only constant challenge is that the cheerleading advisor stepped down, and no one else volunteered, so guess who got the job? Don't get any weird pictures in your head of Dan in a skirt with pom-poms (haha! I did that on purpose - you can't get it out of your mind now, can you?). He's just the final decision-maker for the team on things like uniforms, out of town schedules, fund raisers, etc. But it's way out of his comfort zone and he's already recruiting other people to take it on next year!

Oz Sanchez, the fastest man in the world on a handcycle!
I got to walk and raise funds for the American Heart Association at the START! Walk on Sept. 20th with a group of my co-workers. It's the first time I've done a charity walk, and it was fun to hang out with everyone and represent our company for a good cause. 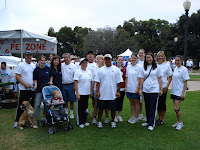 The Epsilon Systems Solutions Team at the AHA START! Walk

Our friends have been on a mission to increase the American population recently! There have been nine beautiful babies born to our friends this year (one couple had triplets, so they bumped up the number!), and there are at least three more babies due before the year's over! We got to visit two baby boys in the hospital who were born on Sept. 18th & 20th - one was born several weeks early and weighed 5.5 pounds, and the other one was full-term and weighed 9.5 pounds! They are both so cute! There's nothing like holding a newborn to remind you that God performs miracles every day!

Dan went to the Chargers vs. Jets game with his friends, Eric and Dave, on Sept. 22nd. It was his first pro football game, and he enjoyed it a lot. They had decent seats, it was a high scoring game, and the Chargers won!! He said he could've done without the halftime band and the drunk people, but it's all part of the experience. :)

Last weekend, I went to our church's women's retreat, which was phenomenal. We studied what Scripture says about our identity as God's children, and talked about how we often act like we're still spiritual orphans (feeling unloved, trying to be self-sufficient, etc.) even though we know that we're adopted as sons and daughters of God through Christ. The retreat was at the Murrieta Hot Springs Conference Center, and it was beautiful and relaxing.

So that's what's been going on with us! It's been a fun month!

great post! what a fun-filled post! i get to see you in just over one month! that's assuming you are still planning on coming to kyle's wedding. i think i remember you saying dan can't come (bummer) but will steve or paul be coming? can't wait to see you!

sorry... that second sentance was supposed to be "what a fun-filled month!"